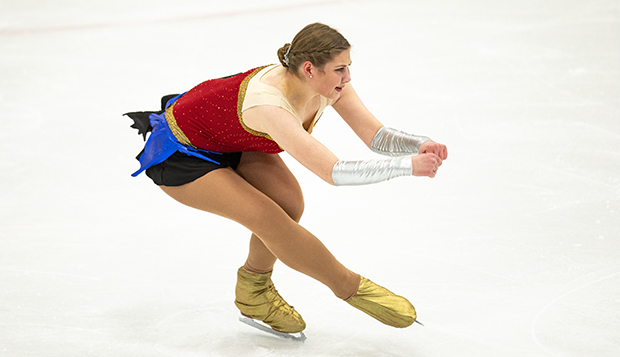 Liberty University's figure skating team hosted the season's first Eastern Sectional South Division competition over the weekend at the LaHaye Ice Center and turned in a record-setting performance. The Lady Flames scored 123 points to finish runner-up to Delaware (169) and ahead of bronze medalist Penn State (94) and Carnegie Mellon (93).

"They did an excellent job," Head Coach Dawn Harter said. "They were highly competitive and had a strong mindset. We were able to fill all 30 of our starts and that helped."

Junior Angela Bosher competed in five events and scored 17 team points in the two-day competition, placing second in both Solo Dance Tango and Pre-Silver Solo Dance, third in Excel Junior Ladies Free Skating, and fourth with her Novice short program and in Intermediate Team Maneuvers. She was joined on that team by sophomore Abbie Steelman, who also placed second in Excel Intermediate Free Skating and third in the Intermediate short program to total 11 team points, and junior Emily Wilson, who also placed third in Silver Solo Dance.

"Our team is ecstatic with how we skated," said Lady Flames senior Haley Gram, who placed second in Excel Juvenile Plus Free Skating, fifth in her group of the Preliminary Solo Dutch Waltz Dance, and joined seniors Kimberly Joe and Christa Lesher and freshmen Marissa Harter and Sarah Hicks on the silver-medal-winning Intermediate Team Maneuvers team. "It was a personal best for all of us. We set a team record and beat our goal of 100 points, placing second overall out of 20 teams in our section."

"I am very elated for the girls on the team," Dawn Harter said. "They have worked very hard and remained dedicated throughout the fall semester ... waiting for this first competition to take place. This is the best we have done, not only point-wise, but with competitive energy. I am so very proud of their accomplishments."

The Lady Flames will next compete at final Eastern Sectional meet set for March 6-7 at Delaware.