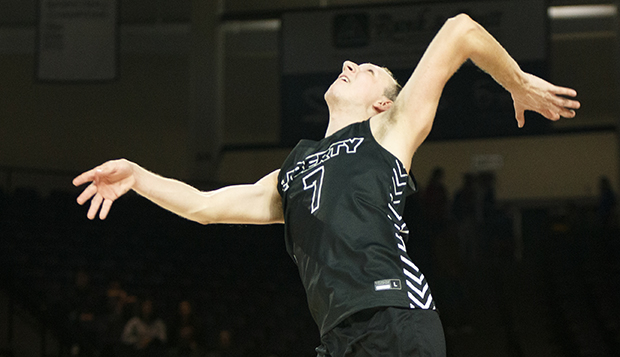 Junior opposite hitter Josh Knapp contributed 47 kills, hitting at a .393 clip over the weekend. (Photo by Luke Bobbey)

It was the third year in a row the Flames advanced to the Gold Bracket, after being eliminated by tournament co-host Illinois in the quarterfinals last year, when they were seeded second, and by ECVA South Division rival Virginia Tech in the semifinals in 2018.

"We should have beaten them (Saturday), but went through a little slump," Flames Head Coach Kaleb VanDePerre said. "Today, we weren't as worked up, and we knew were going to take care of business. We shut down their middles and our offense was clicking on all cylinders."

In the final match against UCF, Liberty won the first game before dropping the last two.

"They were really solid and played super consistent," VanDePerre said. "Their libero got some of the best digs of the tournament which helped fuel them, and they had a really strong outside hitter who hit and scored from all over."

He said the Flames blocked and served well in the first game, and were effective at siding out when they would lose their serve.

"UCF fought back a little at the end of the first game and we lost some of our focus," VanDePerre said. "Then in the second game, they absolutely took it to us. We got worked everywhere. Finally, in the third, we were making plays, blocking well, and scoring well. We were leading most of the way, but just couldn't close it out."

He said the Knights made some big blocks in the third game that took Liberty out of its system, and were fresher having played one fewer match after winning their pool on Saturday.

"They were scrappy, and it was a really fun final match," VanDePerre said. "It was a long weekend and it really tested us. The guys were tired, but I was proud of how we stayed together. It didn't go our way, but we will have more chances to win tournaments, especially if we play the way we did this weekend. . That was the farthest we have ever gone in this tournament. We just have to work on closing it out in high pressure situations."

Sophomore Cross Edwards moved back to libero and handled the transition with ease, with sophomore Tait Lapham shifting to defensive specialist. Graduate addition Kaden Knepper, who played defensive specialist in last week's ECVA South Play Date at Liberty, joined sophomore Tommy Speelman as a setter in the Flames' new 6-2 formation and complemented one another well.

"We'll probably stick with it," VanDePerre said of the offensive set.

The Flames will be off next weekend before traveling to play NCAA Division III Randolph-Macon on Feb. 28 in Ashland, Va.