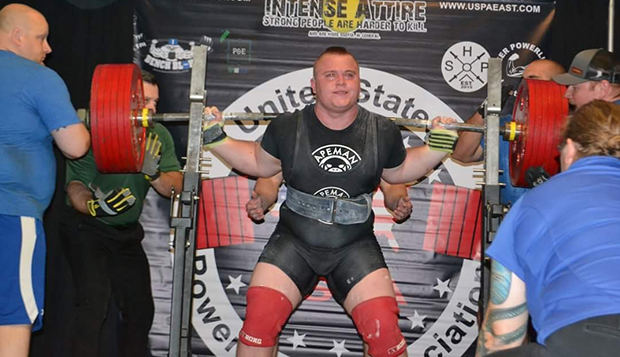 On May 17, 2019, Liberty University junior physical education major and amateur powerlifter Duncan Hundley tore his ACL and meniscus while in competition. A year later to the day, he will be representing Team USA in the International Powerlifting Federation (IPF) Bench Press World Championships held in the Czech Republic as the top-ranked United States competitor in the 18-22-year-old, 264-pound class.

Hundley grew up in Knoxville, Tenn. When he was 4 years old, his father and mother divorced, beginning what would become a childhood void of a father figure in the home.

Hundley's mother Terresa worked tirelessly to provide for Duncan and his younger sister, Elizabeth, working as long as needed each day to put food on the table for her children.

As high school began for Hundley, the young teenager fell in love — not with a girl, but rather his school's weight room where he and his fellow football teammates trained for the season.

"I actually played football so that I could lift weights," he said. "Starting in high school, I just loved to lift weights."

During his high school football career, Hundley split time playing on the offensive line as well as in the backfield as a fullback when called upon. The 5-foot, 10-inch, 260-pound ball of muscle was a part of a team that won only three games in his high school career. Despite his team's struggles in the win column, Hundley was named to the Knoxville All Region team his senior year.

He received multiple NCAA Division III college football offers, but was determined to go to his dream school.

"Ever since I was in sixth grade, I have wanted to go to Liberty," he said. "It has been my dream school since I was little."

Since arriving on campus, Hundley has recommitted his life to Christ, weathered a torn ACL injury that led doctors to believe that his power lifting days were permanently over, competed on the national level for weight lifting, and started working under Club Sports Coordinator of Strength & Conditioning Chris Kerr as a strength assistant for the Flames' men's swimming, men's volleyball, and men's and women's hockey teams.

"May of my sophomore year is when I tore my ACL," Hundley said. "As I was recovering, I started bench pressing and would have guys at the gym hold my legs."

Nine months removed from his powerlifting accident, the Liberty junior has made a remarkable recovery. As the IPF Bench Press World Championships rapidly approach, and he targets a personal-record lift of 520 pounds, Hundley has reflected on what is really important.

"Even if weight lifting was taken from me, I would be all right because I have Christ," he said. "The Lord, my mom, and my sister are the three things that are most important to me in life."

Though he and his father currently have a positive relationship, he would not be in the position that he is in today without his mother and sister. Growing up, both women gave him support and encouragement that helped him in the difficult days of not having a present father.

The potential world champion hopes to instill in others the passion and exuberance that he has to live a life pleasing to Christ while competing at the highest level in his sport.

"This bench pressing world championship is like the Super Bowl for kids who bench press," Hundley said. "It's a big deal."