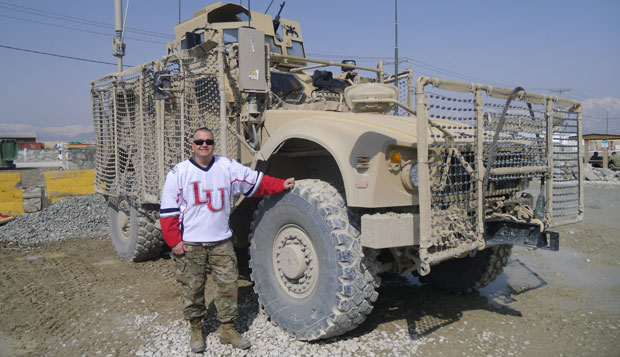 1st Lt. Jeff Grimes, a U.S. Army chaplain serving in Afghanistan, is not only a counselor and peacemaker, but also a passionate supporter of the Flames' hockey teams.

As a 2011 graduate of Liberty Baptist Theological Seminary, with a Master of Divinity degree, Grimes asked Mike Binnie, assistant coach for the men's division I hockey team, for something he could wear in a street hockey tournament recently held at his base camp.

"We provided him some proper gear to represent his alma mater," Binnie said. "As a chaplain and a soldier, he deserves our support. He's supporting American soldiers."

"You would be amazed at how much things like this boost morale for the soldiers," Grimes said in an email thanking Binnie. "This jersey was a wonderful conversation piece for the soldiers that often struggle from day to day. Soldiers come to me worn down and stressed out. They just need some relief from the mission stress, some reminder of being home. The jersey took their focus from the mission to pleasure. They started talking about hockey and other sports."

Liberty's seminary currently trains more chaplains for service than any other institution in the country.

"I have told many soldiers about the benefits and opportunities offered through Liberty University," he said. "With the tuition discounts for military students offered through Liberty as well as a Military Affairs department dedicated to helping those who serve, Liberty was the best choice for me. I am proud to be a Liberty alumnus. I am proud to have gone to a school that supports our nation's military."