Lady Flames tested by fire in dual match against Emmanuel 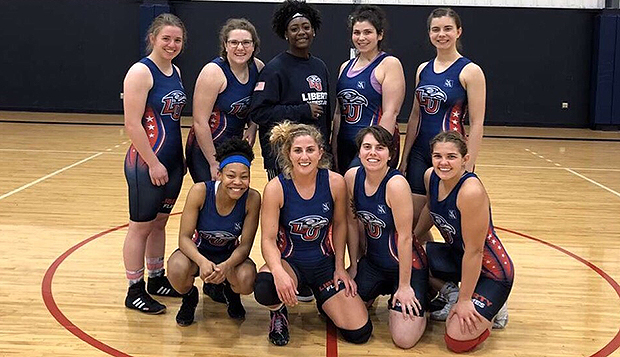 The Lady Flames, who normally wrestle folkstyle, as they will at the March 12-14 NCWA National Championships in Allen, Texas, only managed to win two individual matches, but gained valuable experience in a 39-9 setback. Liberty finished fourth at last year's NCWA nationals while the Lady Lions placed fourth in the Women's Collegiate Wrestling Association (WCWA) National Championships.

"We had to forfeit three weight classes and lost five head-to-head bouts, including four by pin," Liberty women's wrestling Head Coach Josh McIlhenny said. "I was really proud of our girls. I thought they went out and wrestled hard in front of a big crowd. A lot of the men's team came out to support them, so that was encouraging. We were just looking to get some mat time against another team, so the fact that we got to wrestle was our biggest victory."

Senior Jayla Ware started the match by losing by fall to Emmanuel's Emily Se at 116 pounds before Liberty forfeited at 123 pound and sophomore Maria Ferello lost by pin to Alexandra Herle at 130. After Manley's win, junior Marissa Sanders was decked by the Lady Lions' Paulina Jimenez at 143.

"It was very close," McIlhenny said. "Cendall scored a takedown at the end and was looking to turn her for back points that would have put her on top."

After another forfeit loss, Liberty 191-pound sophomore Rebekah Kemper was pinned by EC's Cristina Santoyo in the final bout of the night.

"We weren't as sharp as we could have been, and Emmanuel controlled most of the matches," McIlhenny said. "A lot of the girls they recruit are from California and Texas and have been wrestling all through high school whereas most of our wrestlers have just picked up the sport since arriving at Liberty. We are going to keep training through the (Feb. 29) MAC Championships and look to peak at the (NCWA) national tournament in March in Texas, where we are planning on bringing all nine girls."

McIlhenny has high aspirations for his team at that tournament.

"Absolutely, we are working hard and are excited to get down to nationals," he said. "Last year, we took four girls and finished fourth as a team. This year, with nine going, we are looking to bring home some hardware (with a top-three team showing)."

The NCWA women's division has grown by 40 percent this year, which is a promising sign for the future of the sport. McIlhenny is looking forward to seeing the Manley sisters try to defend their national titles, with Cendall vying for her fourth in a row.

"There are a couple women who have done that before, but it is definitely a rare occurrence," he said. "We're excited, but she's going to have to earn it like everyone else."