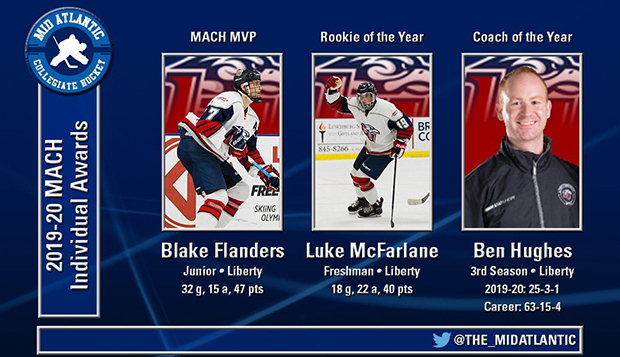 Liberty University's ACHA Division II men's hockey team moved ahead of Florida Gulf Coast University into the No. 1 spot in this week's final Southeast Region rankings to clinch its first autobid in three years to the ACHA DII National Championships, set for March 20-24 in Frisco, Texas.

"That is a first for us as a coaching staff and a first for this set of players to have achieved the autobid," Flames third-year Head Coach Ben Hughes said. "We are extremely proud of the guys and everything they've accomplished so far this year. We are pretty picky on some of the details and we push them hard and have high expectations. They've shown up and worked hard, believed in themselves, and gotten better every day."

He said securing the top seed will provide the Flames an added edge going into the postseason, starting with today's through Sunday's Mid-Atlantic Collegiate Hockey (MACH) Tournament hosted by Rider in Lawrenceville, N.J.

"It will give us a sense of confidence that we've accomplished one of our main goals," Hughes said. "We also have a chance to go for another goal in the same week here and we are super excited and laser focused. "

The Flames are seeded first and will face eighth-seeded Maryland in Friday's 4:10 p.m. quarterfinal. With wins, they would advance to Saturday's 1 p.m. semifinals and Sunday's 2 p.m. championship game.

Hughes was selected MACH Coach of the Year while junior forward Blake Flanders, who scored 32 goals and added 15 assists, was honored as the MACH Most Valuable Player and freshman forward Luke McFarlane (18G, 22A) was named MACH Rookie of the Year.

Flanders was joined on the MACH First Team by junior forward Alex Norwinski and sophomore goalie Dakota Cyhaniuk, who leads ACHA DII goalies with a 16-0 record and eight shutouts as well as a 1.30 goals-against average and 95.2 save percentage.