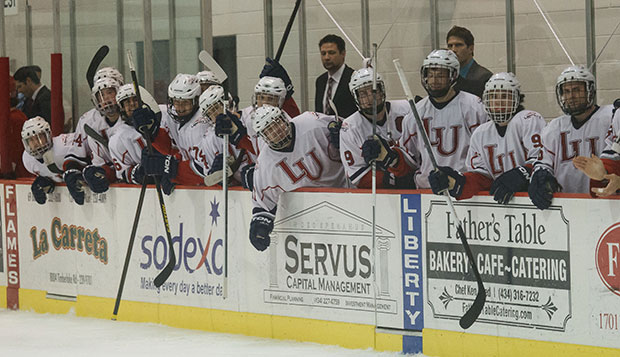 Heading into the American Collegiate Hockey Association Division I national tournament, hosted by Robert Morris Illinois at The Edge Ice Arena near Chicago, Liberty University's Division I men's hockey team is five wins away from claiming the first championship in program history.

It is seeking to become the 11th team in the ACHA's 22 years of existence to take home a national title.

But 13th-year head coach Kirk Handy isn't looking that far ahead, instead focusing on the 13th-ranked Flames' first-round game against 20th-seeded John Carroll, set for Friday at 9:30 p.m. (EST).

"We go there like every other team … looking forward to the challenge of playing five games and being successful," he said. "In a (single-elimination) tournament like this, you have to win Game 1 so we're focusing all of our attention into Game 1. It starts Friday night and we've got to be ready to go play. The level of intensity is going to be ramped up. You have to respect your opponent."

John Carroll, located outside of Cleveland, earned its first ACHA DI national bid by clinching the College Hockey Mid-America regular-season title by the slimmest of margins. The Blue Streaks went 13-3 in conference play to edge West Virginia and Mercyhurst (both 12-3-1).

"They've got an impressive record and obviously have played well this year," Handy said. "We feel like we match up very well against them (but) we're going to have to play our A game."

JCU split two games this season against West Virginia, a team the Flames swept four games from, including in their regular-season-ending series, by 3-2 and 8-3 scores. Those wins snapped Liberty's three-game losing streak, in games against reigning ACHA DI champion Delaware and runner-up Oakland.

"Two wins against West Virginia helped us out in getting our team back to where we want to be," Handy said. "We were struggling a little bit leading up to that point (but now) we're confident in our team and what we're doing."

Liberty faced nine of the 19 other teams in the national tournament field this season, including seven of the top 10 seeds, and went 9-13-1 against them. In the 2012 national tournament the Flames lost in the second round to Adrian (28-3-1), this year's No. 1-ranked team.

"We played a solid schedule and have a solid lineup," Handy said. "It's going to be a good test (and) a great game. We're looking forward to going out there and playing our best hockey Friday night. We're ready to go."

One of Liberty's and JCU's three common opponents this season is fourth-ranked Ohio, the team the winner of Friday's game will go on to play in Saturday's second round, set for at 8:30 p.m. The winner of that will face the winner between fifth-seeded Robert Morris and No. 12-seeded Iowa State in Sunday night's quarterfinals.

The Blue Streaks opened their season with 9-1 and 5-3 setbacks on the road against the Bobcats before the Flames split two games against Ohio in late October at LaHaye, winning the second 4-3 to bump the Bobcats out of the No. 1 spot in the sixth ACHA poll.

The Flames, ranked No. 13 in the 17th and final ACHA DI poll, announced live Feb. 13 from the LaHaye Ice Center, are making their sixth trip to nationals in the seven seasons they've had a DI team, a year after reaching the 2006 DII national championship game.

"Having guys who have national tournament experience is going to be a big key for us," Handy said.

Liberty also will get a boost with the return of a few of the many players sidelined by injury in the second semester, including defenseman Cam Bakker and forwards Christian Garland and Lindsay LeBlanc.

Regardless of who's on Liberty's lines, Handy is blessed with depth and has faith in all of the Flames, including goalie Clayton Brown.

"I like the line combinations and Brown's been strong in the net," Handy said. "We're excited and ready."

Liberty Scouting Report: Senior forward Brent Boschman is the second-leading scorer in Flames history with 98 goals, but Rick Turner, Liberty's third all-time leading scorer, still leads the team and ranks fifth among ACHA DI players in scoring with 72 points on the season after netting a hat trick and adding two assists vs. WVU in his final game at LaHaye. His 41 goals in 28 games is third most in the league while his seven power-play goals and three game-winning goals lead the team.

Ryley Egan is second among the Flames with 42 points (16 goals, 26 assists) and LeBlanc (18 goals, 21 assists, 39 points), who missed the last two games against West Virginia due to a torn meniscus, ranks third.

Brown has recorded two shutouts and a 13-8-1 record in 1,256 minutes this season. He has a 3.63 goals-against average and has stopped 89 percent of opponents' shots on goal.

All-Time Series: This is the two teams' first-ever meeting, though they have faced a few common opponents this season. JCU went 1-1 against West Virginia, a team in its conference, while Liberty finished 4-0 against the Mountaineers. The Blue Streaks lost their two season-opening games against Ohio by a total of 14-4 while the Flames split two contests with the Bobcats. Both teams lost to Robert Morris Illinois — Liberty by a 7-3 count on Oct. 7 in Springfield, Ill., and JCU by 2-0 and 11-0 scores at home on Nov. 2 and 3.

Coaches: Kirk Handy is in his 13th season as the Flames' head coach, with an overall record of 278-121-14. Christian Wilk is in his eighth season as JCU's head coach after guiding Kent State to three ACHA DI national tournament appearances in his 12 seasons at the helm. His record with the Blue Streaks is 97-155-9 after going 129-222-15 with the Golden Flashes, bringing his career mark to 226-377-24.