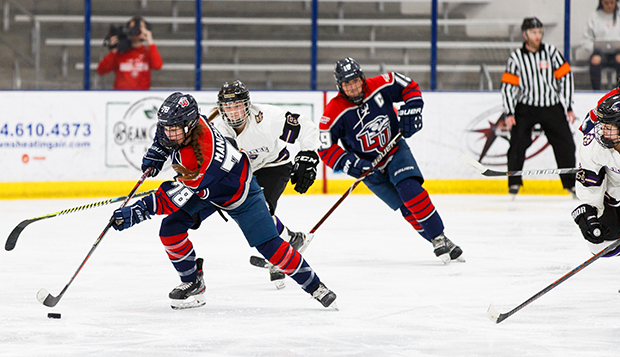 Manchak (15 goals, 29 assists) moved into third place among ACHA DI scoring leaders after netting the first and third goals off assists from Truter, with senior forward Alex Smibert providing a secondary assist on the latter, and assisted the Lady Flames' final two scores in a 5-0 regular-season-ending rout of the fourth-ranked Bulldogs.

"That line is continuing to be dangerous," Liberty Head Coach Chris Lowes said. "Similar to last night, we scored on the game's first shift and took control. I liked our compete level today and love that we wrapped up our regular season against one of the best teams in the country by playing very good hockey. That is very encouraging."

Senior forward Vanessa DeMerchant scored twice, the last on a power play to cap the scoring off assists from Manchak and freshman forward Brooklyn Pellizzari. Junior forward Danica Polson, who ranks fourth in the ACHA in scoring, added a power-play goal set up by Manchak for a 4-0 Lady Flames advantage at the 1:19 mark of the second period.

Lowes said that while the final score was similar to Saturday night's 5-1 opening win, the game was markedly different.

"It was still physical, but there was more five-on-five play as we took fewer penalties," he said. "We did a better job of limiting their chances, and only gave up a couple of real odd man rushes, so we cleaned up that part of our game. We were more dialed in and focused and played better defensively."

Senior goalie Nadia Rupoli made 20 saves before being forced to leave the game midway through the second period with an upper-body injury.

"They had a rush and it was a fast play with a lot of traffic in front that resulted in a collision with one of our players and one of theirs," Lowes said.

She was relieved by freshman Kayla Savoie-Penton, who made the final 13 saves in a combined shutout.

"Between the two of them both played a great game and made some big saves," Lowes said, noting that Rupoli gets credit for the win which raises her record to 11-1, matching that of Savoie-Penton, and giving her a program-record 20 shutouts for her career.

He expects Rupoli to be ready when the Lady Flames return to action at the end of the month.

Liberty outshot the Bulldogs (13-6) by a 45-33 margin and completed a four-game season sweep of Adrian by outscoring its host, 10-1 over the weekend.

"That is pretty promising for our team," Lowes said. "We took control early in both games and are such a good team when we're playing from ahead and rolling out our lines. It seems our confidence grows and we become more comfortable."

The Lady Flames have the next two weekends off before traveling to Maryland to face the Washington Pride in a Feb. 29-March 1 exhibition series, a final tune-up for the inaugural Women's Midwest Collegiate Hockey League (WMCHL) tournament, set for March 6-8 in St. Louis.