Top-ranked Lady Flames bullish in blowout of No. 4 Bulldogs 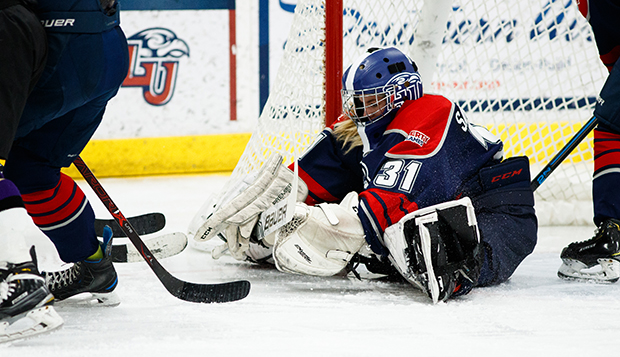 Freshman goalie Kayla Savoie-Penton gets down low to make a save at home last weekend. (Photo by Luke Bobbey)

In a top-five rematch of the 2018 national championship game, won by the Lady Flames, Liberty University's No. 1-ranked ACHA Division I women's hockey team opened a 5-0 lead on No. 4 Adrian (Mich.) College and held on for a decisive 5-1 triumph in Saturday night's series opener at Arrington Ice Arena.

"Adrian is arguably the biggest rival we've had since I've been coaching this team so it was a solid win on the road against a very good team," Liberty Head Coach Chris Lowes said. "We made the most of our chances and they had four or five breakaways in the game that (freshman goalie) Kayla (Savoie-Penton) stopped."

"That was Kayla best performance of her career at Liberty," Lowes said. "She played really solid, made some saves in traffic and played big. She looked solid and confident on the breakaways. The one goal they scored was an unfortunate bounce off another player's skate."

Liberty led 2-0 after one period and 4-0 after two in a game slowed by 22 penalties, including 13 assessed to the Lady Flames, the last of which resulting in the only goal by the Bulldogs (13-5).

"It was a super physical game and the refs had to call the penalties," Lowes said. "We had to kill lots of five-on-threes tonight."

With the two teams skating four-on-four in the second period, Manchak drove wide and finished cleanly, padding Liberty's lead to 3-0 with assists from Truter and senior forward Alex Smibert.

Senior forward Vanessa DeMerchant then finished a feed from Smibert on another four-on-four, putting away a rebound after Smibert's driving shot on net. Then in the third, Lady Flames senior defenseman Emily John walked in from the point and picked a corner with her wrist shot after receiving assists from junior forward Shelby Bradford and Truter.