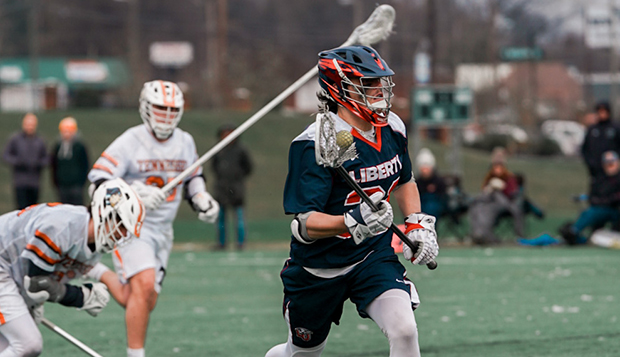 The fifth-ranked Flames battled through the elements and received balanced scoring and defensive contributions in an 18-6 victory over the Volunteers.

"It snowed pretty much from when woke up to right before game time and accumulated about an inch and a half to two inches," Liberty Head Coach Kyle McQuillan said. "That made for a bit of a unique atmosphere to play in, but we had a wet week of practice and forced our guys to practice through that and be prepared for whatever we might get. It was wet and slushy and definitely prevented us from being as proficient as we would have liked with our stick skills, but it was still a good first game."

The Flames wore the standard issue cleats they are used to playing in on the Liberty Lacrosse Fields, where the surface is similar, and eventually found the traction they needed to make the cuts their offense requires. Liberty opened a 6-1 lead after first quarter and extended it to 11-2 by halftime and 15-3 by the end of the third quarter.

"Tennessee has some good players and will find success in their season, but we were able to do what we needed to do to get a good margin of victory," McQuillan said.

Ryan Reynolds posted 11 saves and only allowed two goals in the first three quarters of play before being relieved by fellow senior goalie Cole Anstadt, who made four saves and allowed three goals in the fourth quarter.

"Ryan's going to be a huge part of our success this season," McQuillan said. "He is a guy who most often plays better in games than in practices. Cole has only been with us for two weeks and was able to get some minutes in, which was good. We expect him to continue to develop.
"The best thing about the day was being able to get in all three of our middle lines, all six of our attackmen, and both of our goalies," he added. "It shows we have great depth and can go to our secondary guys and get great results. Today was our first good opportunity to prove that."

Freshman Jackson Miller paced the attack with two goals and two assists while senior Caleb Britton added a hat trick with three goals and freshman Nathaniel Spears netted two goals and an assist in the second half.

"We are excited about his potential," McQuillan said of Spears.

"Looking at the stat sheet, from the offensive to the defensive side, it was a good showing overall," McQuillan said. "We still have some things we can clean up. We definitely still need to continue to be a bit more disciplined and consistent."
Liberty (1-0, 1-0 SELC Northwest Region) will have a bye next weekend and use the extra time off to prepare for its home opener against East Carolina on Friday, Feb. 21, at 9 p.m. followed by a showdown with No. 12 Michigan State on Sunday, Feb. 23, also at the Liberty Lacrosse Fields.

The Flames will then host Northwest Region rivals George Washington and West Virginia on Feb. 28 and March 1, respectively.

"Typically, we don't love playing our regional opponents (including Tennessee) this early in the season, but to be one step closer to locking up an SELC tournament bid, we'll take it, especially with how competitive it has gotten in recent years," McQuillan said.

Liberty is one of three SELC teams ranked in the top five in the preseason coaches poll, behind No. 1 defending MCLA national champion South Carolina and No. 4 Georgia Tech. The Flames will travel to challenge the Gamecocks on March 21 and Yellow Jackets on April 5 before closing out the regular season April 12 at home against Northwest Region rival Virginia Tech, ranked 14th.

"(No. 8) Florida State and (No. 18) Clemson are also ranked SELC teams that we will play this season, though there could be a lot of shakeup in the rankings this first month as teams take the field and games are being played," McQuillan said.