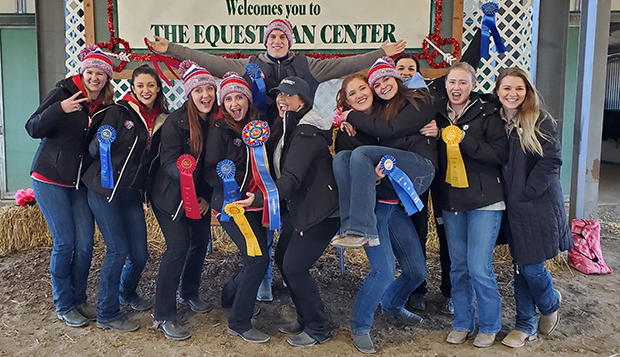 Liberty University's Western equestrian team had four more riders qualify to compete at the Western Regional Championships during first- and second-place team showings at this past weekend's Region 4 competition at St. Andrews University in Laurinburg, N.C.

Sophomore Faith Dantona and senior Megan Brandt secured their regional bids in the Open Horsemanship division while Madeleine Temple advanced in Level I Horsemanship and fellow senior Brianna Bass met the qualifying standard in Level II Horsemanship. They will join senior Kara Wiley, who qualified previously in the Rookie B division for the Feb. 16 regionals at Martin (N.C.) Community College.

"This weekend was a lot of fun," Western Assistant Coach Madeline Shrode said after the Lady Flames' first regular-season win in her second season at Liberty. "Seeing their hard work in practice pay off in the show area was great. Our goal has been to be consistent and to go toe-to-toe with St. Andrews every time we compete and we have definitely stepped up to that plate. I am excited to take this group to Regionals."

Shrode is hopeful the Lady Flames can qualify one more rider for the Region 4 Championships — sophomore Savanna Graves in the Open Reining division — at the final regular-season show on Feb. 15, the same location as the next day's regional championships.