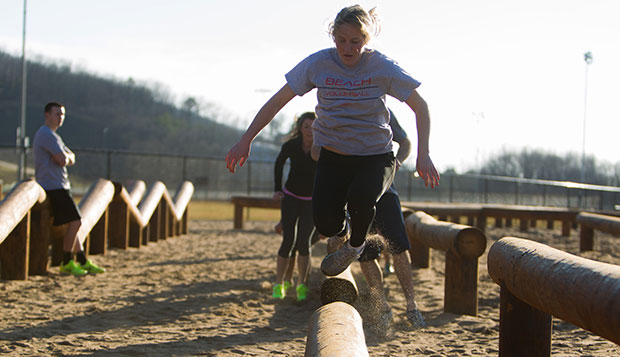 Liberty student athletes take advantage of workouts on The Patch, a pit of sand that forms the base of an obstacle course made of logs. This new course is located off Candlers Mountain Road down the mountain from Liberty Mountain Snowflex Centre. The sand workout is excellent for stability and strengthening joints.

Campus facility upgrades have transformed Liberty University in dramatic ways over the past decade, and many ongoing projects continue to lay the foundation for the future growth and functionality of the world's largest Christian university.

Over the past five years, Liberty's Senior Director of Campus Recreation Kirk Handy, who also serves as the Flames' ACHA Division I men's hockey coach, has overseen a major overhaul of the school's Club Sports facilities, paralleling the modernization and expansion of its NCAA programs.

"It is exciting and we definitely are blessed," said Handy. "When I got into Club Sports in 2008, Chancellor Jerry Falwell, Jr. wanted a big push on it. It's been really cool to see where it started in 2008 and where we've progressed to today."

Winter sports have taken off since the opening of the LaHaye Ice Center in 2006 — home to the men's (Division I, II, and III) and women's (Division I and II) ice hockey teams and the women's figure skating and synchronized skating teams — and Liberty Mountain Snowflex Centre, which opened in the summer of 2009 and serves as the training base for the men's and women's ski and snowboarding teams.

Spring and summer sports have gotten a huge boost with the gift of Ivy Lake and construction of a boathouse for the men's and women's crew teams in 2009, the opening of the Liberty Lacrosse Complex in the fall of 2011, and the addition of four new beach volleyball courts beyond the new intramural fields at the base of Liberty Mountain, this winter.

Liberty men's lacrosse coach Kyle McQuillan remembers when he had to be creative in scheduling his team's practices and game locations before the complex was constructed.

"Field space was a high commodity from the very beginning," he said. "The first year we were a program, we kind of bounced around wherever we could get access. We played a couple games in the soccer stadium and practiced near Champion Circle for a while."

McQuillan compares the Lacrosse Complex setup favorably to many NCAA facilities and to many schools in the Men's Collegiate Lacrosse Association, the conference in which the Flames compete.

"It's the top facility in the MCLA bar none," he said. "It's a tremendous blessing. It's been nice to have a place to call home, for sure."

The complex is a huge draw for generating recruiting interest for the club program.

"Our kids are blown away by it for recruiting possibilities," McQuillan said.  "It shows how serious Liberty's taking lacrosse, being so young. It provides a foundation for us to build on."

He said the artificial surface is ideal in that it drains well and doesn't get muddy with rain and requires little maintenance. The field house gives the team a home base out of which to operate.

"It is a constant, reliable place to practice, and to house our gear and our guys," McQuillan said. "It's really immeasurable how much that improves our program and will continue to do for us in the growth of our program."

The complex has gradually become more fan-friendly, with plenty of room to grow.

"Initially, it started out with no seating and now we've got probably 1,500 seats (between the three fields)," McQuillan said. "Our hope is to maximize that and to overflow that. There is an ample amount of space to add seating."

Beach volleyball is one of the more popular recreational sports on Liberty's campus, rivaling indoor volleyball and basketball.

"It's next to impossible in the spring, summer, and fall to get on any volleyball courts on campus, there's so many students that use them," said Drew Sherwood, Flames men's and women's beach volleyball head coach. "It is the most popular recurring event from week to week."

With the beach volleyball club teams starting up this year, Sherwood needed a place for his players to practice and train. The four new lighted courts, located adjacent to four new flag football/ultimate frisbee turf fields and one grass softball field near Candlers Mountain Road, complement the four sand courts already in place next to the new Lacrosse Complex on East Campus.

Sherwood, who also oversees Snowflex, is impressed with the quality of both sets of courts.

"The school (including Lee Beaumont, vice president of Auxiliary Services, and Shane Pinder, head coach of the NCAA Division I women's volleyball team) did an above-and-beyond job building and designing those," he said. "They put together a phenomenal court system that we have and just carried that over for four more courts."

An interesting new feature beside the new beach courts is The Patch, a sand-based agility course with logs set up as obstacles. It is already being put to good use by many of Liberty's NCAA programs, including football, in workouts directed by head strength and conditioning coordinator Bill Gillespie. Club Sports teams, including the men's and women's hockey, wrestling, and beach volleyball squads, also have held training sessions on The Patch.

"Sand is just a good stability workout, for strengthening, doing rehab on your joints and your knees," Sherwood said. "A lot of the hockey guys like to go over and play on it."

There is also a new indoor training facility open to all Club Sports athletes located in the former Liberty Christian Academy football fieldhouse, across from the lower parking lot at the LaHaye Ice Center. It was renovated over Christmas break and is awaiting the arrival of equipment before athletes can start using the training rooms.

Handy said the program has outgrown its training facility in the LaHaye Ice Center.

"We built it when we had 150 student athletes," he said. "Now with 500 student athletes, we've grown out of it, so we're getting this whole brand new building and we're going to move all the teams out there, except for hockey."

Currently, the wrestling team practices in the Wiseman Wrestling Room, located at the south end of Williams Stadium, and uses the new Schilling Center for its home matches, including this Saturday's Mid-Atlantic Conference tournament.

Plans are also being made to add an on-campus gymnastics arena in the new Schilling Center, scheduled to open in 2015, which would replace the current setup in The Plaza shopping center in midtown Lynchburg.

"It's part of this new plan we've got going for the LaHaye Student Union," Handy said. "Once we get that all wrapped up, that'll be another thing that is really going to catapult that team."

The facility will be designed to accommodate all of the equipment needed for practicing and hosting gymnastics competitions.

Handy said the men's volleyball team will also benefit from a planned expansion to the LaHaye Student Union.

Additional projects to enhance sports and recreation offerings for Liberty's student athletes are in the planning stages, particularly around the new Schilling Center and the LaHaye Student Union.