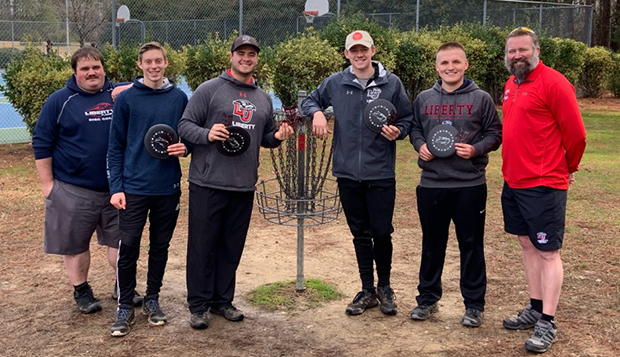 "We had a bogey on 17 but were still up by one and ended up holding on to the lead and winning by one," Flames Head Coach Steve Bowman said. "On 18, (NC State) parked its approach shot 10 feet from the basket (but) Stephen stepped up and sank a 40-foot putt that prevented us from going to a playoff."

Last spring, the Liberty men's championship flight finished a program-high third at the National Collegiate Disc Golf Championships, one spot behind the Wolfpack.

"NC State hadn't lost a tournament all year, so it was nice to give them their first loss, especially on its home course," Bowman said.

The Flames and Lady Flames entered three men's teams and two women's tandems in the tournament, which included singles and doubles play on Saturday and a final round of doubles on Sunday.

Curry had finished runner-up in singles play with a 53-shot total, behind only the Wolfpack's Michael Jordt (51). He was joined by senior Dustin Barrett and sophomores Pete Curran and Spencer Ellingson on Liberty's A team, which won with a 155 total, followed by A squads from NC State (156), Clemson (160), UNC Charlotte (165), South Carolina (167), and East Carolina (167).

The Flames' B (191) and C (205) teams placed 17th and 18th, respectively, while its women's A pair of junior Olivia Hayes and senior Mackenzie Patrick totaled 246 and B tandem of seniors Hannah Miller and Anna Luff scored 252 to finish second and third, respectively, behind Clemson (230). Senior Shannon Hons, one of the Lady Flames' top players, joined the men's C lineup.