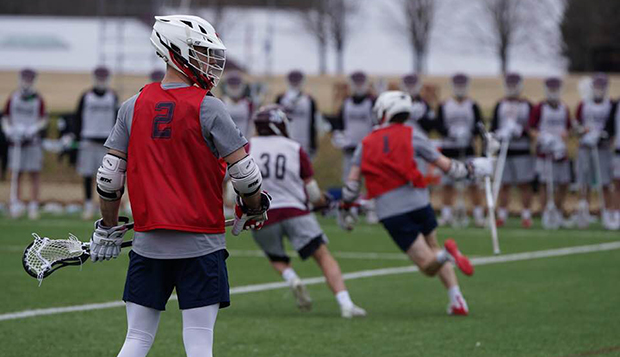 The Tigers capitalized with three goals on a one-minute non-releasable man advantage late in the third quarter to break open an 8-8 tie and pull away for a 14-11 victory over the Flames, who are entering their seventh season competing in Division I of the Men's Collegiate Lacrosse Association (MCLA).

"Hampden-Sydney is a really good program," Liberty Head Coach Kyle McQuillan said. "It has a lot of guys on the roster and is probably one of the most disciplined teams we've been able to play. For us to get a scrimmage against an opponent of that caliber was a great opportunity for us."

Several parents and families and friends of Liberty's players made the more than hour-long drive to get a first glimpse of the team in action.

"A lot of our families and other Flames fans will travel anywhere we do, and set up a tailgate here," McQuillan said. "Taking an hour-long bus ride and having as many fans as we did made us feel close to home."

McQuillan did not keep statistics for the game nor specify individual performances that stood out, but he and his staff and players will spend the next week reviewing the video from Saturday's contest in preparation for next Saturday's 2020 MCLA opener at SouthEast Lacrosse Conference (SELC) Northwest Region rival Tennessee.

"We had a lot of sloppy play and made a lot of mistakes today, but just to get an opportunity to go out there and knock some rust off and get some great video was huge," McQuillan said. "There were definitely some moments where individual players shined, but we can definitely find a lot of instances where we shot ourselves in the foot. We got beat by a more disciplined team that wanted it more than we did today."

The Flames rallied from an early 6-2 deficit, winning the second quarter, 4-2, before tying it up in the second half.

"There were a lot of positives, but enough negatives that Hampden-Sydney was able to pull out the victory," McQuillan said. "Everybody's got something to learn from this and we are going to spend the week really dissecting the tape and looking at the team as a whole and seeing how we come together. We know going into next weekend and this season if we can fix the things on our side of the ball, we've got a great opportunity to have a great season."