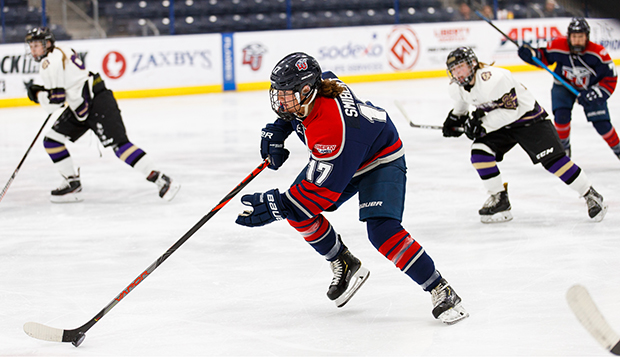 Not exactly. Those are the jersey numbers of the nine seniors on Liberty University's top-ranked ACHA Division I women's hockey team. They all played key roles in leading the Lady Flames to the National Championship finals in each of the past three seasons and could help Liberty complete a national title three-peat at this year's tournament set for March 25-29 in Frisco, Texas.

The nine seniors — who have combined for more than 300 goals and 300 assists over their four-year careers — were honored before Saturday's "Senior Night" game against McKendree at the LaHaye Ice Center, where their jerseys hung proudly on display over the rail beneath the scoreboard and flags representing the United States and Canada, where eight of the seniors are from. They were given red-carpet treatment in a pre-game ceremony honoring the players and family members who made the trip.

After fending off the Bearcats, 3-1, in the series opener that ended early Saturday morning, the Lady Flames (20-2) jumped out to a 4-0 lead after the first period en route to an 8-1 rout in the afternoon rematch.

"We just kind of got off to a hot start," Liberty Head Coach Chris Lowes said.

Val Manchak, a first-year graduate forward from Ukraine, put the Lady Flames on the scoreboard first at the 12:50 mark of the first period after junior forward Shannon Fehr set up freshman Yannick Truter for a shot from the left circle. It was blocked by McKendree goalie Brittnee Kenny, who dove to her right, leaving the net open for Manchak to clean up the rebound in the right crease even as she was taken down from behind by Bearcats defenseman Laurynn Davey.

Then, after winning a faceoff in the left circle, senior defenseman Deena Birney launched a shot from the top of the left circle that Fehr deflected to Truter in the left crease for an open finish and 2-0 edge with 11:08 to go in the first period.

"It was definitely good to see our lines and defensive pairings clicking," Birney said. "We're really starting to dial in just realizing we don't have that much longer before our last (postseason) run and hopefully we can all be on the same page and finish strong."

The Lady Flames capitalized in the final second of a power play with 7:48 left in the first when freshman forward Brooklyn Pellizzari punched in a loose puck inside the right post off a backhanded feed from Manchak, extending their lead to 3-0.

Liberty capped the first-period scoring with 15 seconds to go when Vanessa DeMerchant won a faceoff in the defensive end to fellow senior forward Alex Smibert, who skated it up the right wing before sending a crossing pass to junior forward Shelby Bradford for a one-timed finish in the left crease.

Midway through the second period, the Lady Flames stretched their lead to 5-0 on a sweeping give-and-go sequence through the right circle between Bradford and DeMerchant, who sneaked a wraparound shot from deep in the slot inside the left post at the 10:05 mark.

"Our line produced a lot of chemistry and good passing down low today," DeMerchant said. "Shelby and Alex finished, too, so it was really nice for us to click and kind of get rolling again."

With 4:19 left in the period, Birney lifted a wrist shot from the high slot that Bearcats goalie Naomi Leasck, who replaced Kenny to start the second, blocked high into the air before senior forward Aly Morris stuck it inside the left post for a commanding 6-0 advantage.

McLeod stretched Liberty's lead to 7-0 at the 9:20 mark of the third period by sneaking a shot through from the top of the left circle off assists from sophomore forward Grace Machholz and Morris.

McKendree ended Lady Flames senior goalie Nadia Rupoli's bid for an eighth shutout, which would have tied her for most in the ACHA, by scoring with 7:56 remaining in regulation when freshman forward Camryn Scully followed her own blocked shot with a putback in the left crease.

But the Lady Flames regained the seven-goal differential with 2:01 to play when Morris skated into the left corner and passed the puck along the back boards to Machholz before punching in a return feed at the left post for the final score.

"It was fun," Morris said. "We still have a few games left so we're trying not to put too much of an end to it, but it is kind of sad playing for the last time at LaHaye. We just want time to slow down. These are definitely some of the best years of my life and I want to enjoy every moment."

Rupoli improved to 10-1 and 66-4-3 for her career, including a school record 19 shutouts, with her goals-against average (0.85) and save percentage (95.7) both ranking first in the ACHA this season.

Next weekend, Liberty travels to Michigan for a regular-season-ending series at No. 4 Adrian in a rematch of the 2018 National Championship, won by the Lady Flames in their first season under Lowes. They will then travel to face the Washington Pride in a Feb. 29-March 1 exhibition series, a final tune-up for the inaugural Women's Midwest Collegiate Hockey League (WMCHL) tournament, set for March 6-8 in St. Louis.

"I always find second semester flies by just because you're in that home stretch to nationals and it just goes by so quickly," Birney said. "Every practice, every game, every workout counts, just doing the extra things off the ice to be better on the ice, bonding as a team and finding that chemistry. Everything matters." 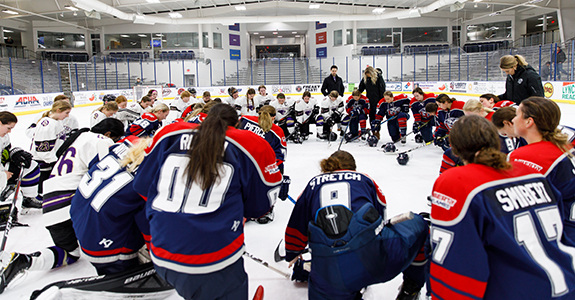 Liberty players and coaches were joined by those from McKendree for post-game prayers.