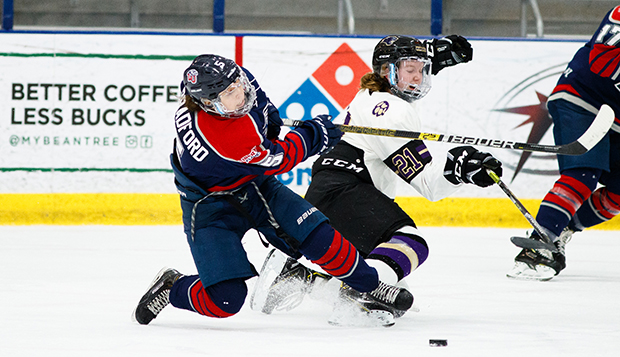 After a midseason break that lasted more than two months, Liberty University's top-ranked ACHA Division I women's hockey team didn't take long to shake off any rust in Friday's late-night showdown with No. 7 McKendree at the LaHaye Ice Center.

"I think we were all pretty excited to get back going again," junior forward Danica Polson said. "We were a little rusty, but we know what to do. We still have a lot of work to do before (ACHA Nationals in late March), but we're getting there."

Polson, Liberty's leading scorer, finished a putback through the five hole of Bearcats goalie Naomi Leasck from deep in the right crease for a 1-0 advantage with 17:46 left in the first period. Sophomore forward Grace Machholz got the assist on the play after winning a faceoff in the left circle and lifting a quick shot on net.

"I just drove the net and Grace made a really good pass," Polson said. "It's something we work on a lot so we finally capitalized on it."

"Good faceoff play by (senior forward) Aly Morris' line with Grace (Machholtz) and Polson," Liberty Assistant Coach Justin Forth added. "Everyone's a little bit sloppy in their first game back. We've just got to build on this. There's nothing but positives moving forward."

Polson, who now ranks tied for second in the nation with 17 goals and 19 assists, added a second goal to her season total midway through the second period. She converted on a fast break set up by senior forward Vanessa DeMerchant, who skated the puck behind the cage and passed it back to Morris, whose shot in the left crease was put away by Polson near the right post for a 2-0 lead at the 10:47 mark.

Exactly three minutes into the third period, the Lady Flames (19-2) added a third goal when junior forward Shelby Bradford stole the puck along the Bearcats' left endline and scored unassisted by skating across the crease and wrapping the puck around Leasck inside the right post.

"Good individual effort by Bradford and that's what we've been preaching, relentless pursuit of the puck, good forecheck, and she was rewarded by that," Forth said. "We're preaching ‘Go to the blue paint, go to the net.' It's good to see little things that we talk about come into fruition. So hopefully the girls can see it and rally behind it and just believe in it moving forward."

McKendree capitalized on a power-play opportunity with 11:44 remaining in regulation when defenseman Madison Puffalt's crossing pass from the right side glanced off the stick of Lady Flames freshman goalie Kayla Savoie-Penton through the five hole, trimming the deficit to 3-1. But the Bearcats would get no closer.

Forth was pleased with the fitness level the Lady Flames showed as a team upon their return to action after last sweeping Miami (Ohio) University on Nov. 22-23.

"It's been a long break, but we've had two and a half to three weeks of good practices," he said. "The last couple weeks, the energy's been good in practice. (Strength and Conditioning Coach Chris) Kerr's done a good job getting them ready for this game and I think we were in good shape tonight, but execution wasn't there … as there were some two-on-ones we didn't capitalize on."

The game marked the debut for Liberty freshman defenseman Julia McDonald, who turned 18 over the Christmas break and became eligible after sitting out the fall semester, and the return of junior forward and team captain Shannon Fehr, who was relegated to the bench for much of the fall by injury.

"It's really great to celebrate the seniors," Forth said. "It's business as usual, but it's going to be cool for them to appreciate it. They've played a lot of home games here and it's going to be bittersweet. Everybody's parents are in town to celebrate it with them so I think they're just going to enjoy it and have a ton of fun." 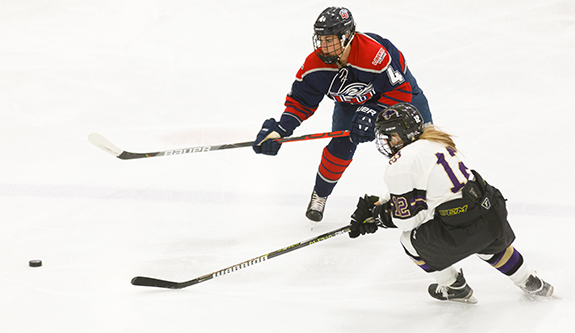 Senior defenseman Emily John battles for the puck with the Bearcats' Allison Sauvola.