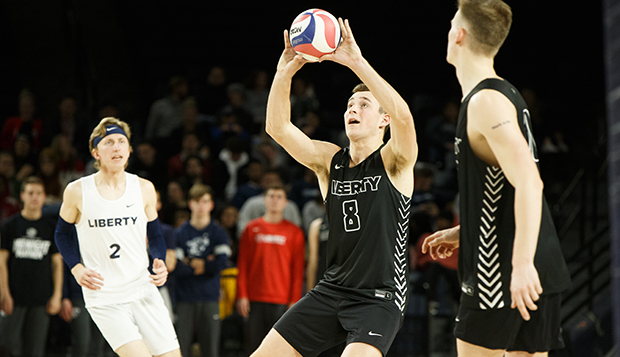 Without the faithful fan following it enjoyed in Saturday's five-game, come-from-behind "Midnight Mayhem" match victory over Maryland in the Vines Center, Liberty University's men's volleyball team wasn't able to carry the momentum over into Thursday night's showdown at Southern Virginia.

The Flames totaled eight kills in both of the first two games while combining to commit 10 unforced errors before spiking only seven kills with 11 errors in the third game.

Nahuel Recabarren, a junior outside hitter from Argentina, paced SVU with 13 kills, hitting at a .478 clip, as well as collecting five digs, five block assists, and one stuff block.

Watch a replay of the complete match on SVU's YouTube channel.

Next up, Liberty will host an East Coast Volleyball Association (ECVA) South Play Date next Saturday at the LaHaye Multipurpose Center, needing a top-two finish by its Division I and II teams to qualify for the March 28-29 East Coast Championships at College Park, Md.