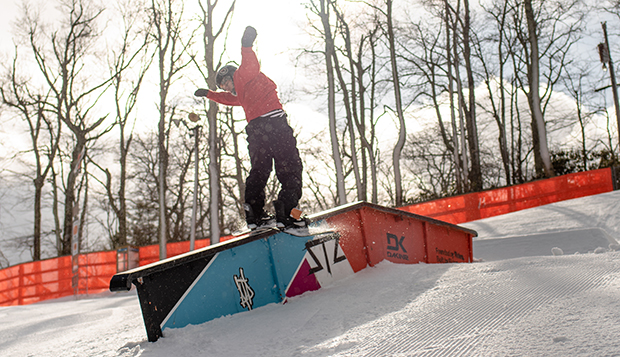 Milo Rice performs a trick on a slopestyle feature at Beech Mountain Resort on Sunday. (Photos courtesy of Skyler Fusco)

"We did really, really well and were very, very pleased with our scores and placements," Liberty Head Coach Isaac Gibson said, noting that the terrain park was an ideal setup, offering a variety of features to choose from. "It was a really good venue for hosting a slopestyle contest. There were three tiers and each had three different options of features you could hit. For intermediate to experienced riders, it was a good initiation into the competitive season."

The Flames' strongest showing was in the men's snowboard competition, where senior Milo Rice (75), freshman Jesse Mast (64.67), and freshman Tyler Sherbine (64) combined for a 1-2-3 finish.

"They were right on each other's heels," Gibson said.

Liberty, which had five riders in the top 10 including junior Owen Hewitt (fifth, 50.67) and freshman Josh Heinrich (ninth, 44.67), won the team competition with 6 points, followed by NC State's 38-point total.

In the women's snowboarding event, freshman Coleen Leja was the overall winner in a landslide with a 54.333-point score, followed by freshman teammate Emory Orlando (23) to lead the Lady Flames (19 points) to a second-place team showing behind Appalachian State (15), which landed four in the top 10.

Sophomore Samantha Pesile placed 17th out of 38 women's snowboarders with her 9.33 run in her first contest after learning to snowboard at the Liberty Mountain Snowflex Centre as a freshman.

Despite competing without junior Cole Loomis, who sustained an injury in practice last week, and junior Eli Haita, who was injured on his first run, the Flames' men's skiers won a tight team race, totaling 14 points to edge UVA (17) and UNC (19).

Liberty will leave from Snowflex on Wednesday night for a weekend of practice at Waterville Valley (N.H.) Resort in preparation for the upcoming Feb. 28-29 USCSA Mid-Atlantic Region competition at Blue Mountain (Pa.) and March 8-14 USCSA National Championships at Lake Placid, N.Y.