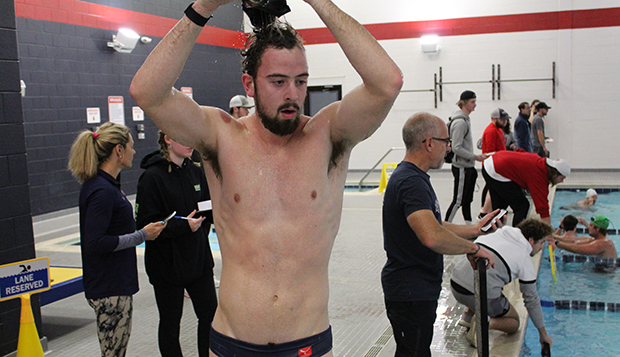 Flames freshman David McCurdy transitions out of the LaHaye Aquatic Center pool to the cycling studio. (Photos by Ted Allen)

The timed race featured a 10-minute swim in the LaHaye Aquatic Center pool followed by 30 minutes of stationary cycling and a 20-minute run on treadmills or around the overhead indoor track.

"It was a great turnout, three times the number of people as last year, and our team members were so into it, dancing to the music while the other triathletes were on the bikes and screaming for them when they were on the track or the treadmills," Liberty Head Coach Heather Gollnick said.

Gollnick said for many of the outside competitors, it was their first experience doing a triathlon of any kind.

"Many of them commented on how much fun it was and how fun it was having the Liberty University students encouraging them," she said, noting that many of her team members exceeded her expectations. "For a couple of them, this was their first super hard effort in all three sports together since they came back from break. It was great for them, made them push themselves which was good. I could really tell who trained hard over break."

"Mark and Max were pushing each other, which was good," Gollnick said. "They're good friends and they work well together."

The event served as a fundraiser for Liberty's last two races of the spring semester. The Flames and Lady Flames will take 15 triathletes to the Clermont (Fla.) Draft-Legal Challenge on March 7-8 before sending as many as qualify to the USA Triathlon Collegiate Club National Championships, set for April 4 in Tempe, Ariz.

"Clermont's the one we're focusing on now," Gollnick said. "Everyone's really getting excited for it and training hard for it."