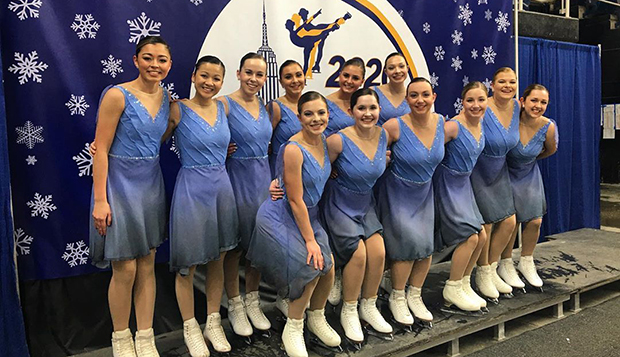 Liberty University's 12-skater synchronized skating team qualified for the United States Collegiate National Championships for the third season in a row by finishing fifth in the Collegiate Division at this past weekend's Eastern Sectionals, held at the Times Union Center in Albany, N.Y.

"We were the smallest team in our division, competing against teams with 16 competitors, so I was really proud of how they pulled together and were able to do this week," Head Coach Tatiana Payne said.

The Lady Flames recorded a total score of 52.48, which was a combination of their technical (24.52) and component (27.96) scores. Both the total and component scores were the highest Liberty has ever earned at an Eastern Sectional competition.

"Our score at Boston (for the Nov. 15-16 Synchronized Skating Classic) was a 52.04 so this was our season-high total, though our technical score at Boston was three points higher," Payne said. "The girls skated pretty well, though we did have a fall, so there is definitely room for some improvement going into nationals."

"We missed a pewter medal (for fourth place) by 1.42 points to the University of Massachusetts, so we are really motivated going into nationals to not have any errors and to beat them there," Payne said.

Liberty was less than three points off the program-record total (54.91) it received at last year's national competition in Michigan, where it placed 10th. This year's event is set for Feb. 26-29 in Providence, R.I.

"We have never competed in Rhode Island before," Payne said. "We definitely have some positive momentum going into nationals, where we want to beat our score from last year. We have five weeks to improve and a solid bunch of girls who are really willing to put forth the hard work through to the end."

The Lady Flames will be one of 12 teams competing in the Collegiate Division at nationals — six from the East Coast and six from the Midwest. After starting the season with 14 team members and two captains, Liberty is down to 12 skaters and one captain, Emma Henderson, who will graduate next December.

"All the other teams we will be competing against have 16 skaters, which is the max, and most of them have alternates," Payne said. "It is disappointing to have such a small team because certain there are elements we are not able to max out on.  But if we can improve upon the confidence we take into some of the elements we've worked on, we should do well. Only half of our elements were called (at sectionals), so there are at least five or six points we can add to the technical score that we are hoping to get called at nationals."

Unlike last season, when Liberty made some significant revisions to its routine between sectionals and nationals, Payne said the Lady Flames can simply focus on polishing this year's performance heading into nationals.

"We'll just be cleaning things up and getting more confident in what we're doing," she said. "Going into nationals, the girls are hungry to beat those teams we've beaten in the past and others, like UMass, we are so close to."