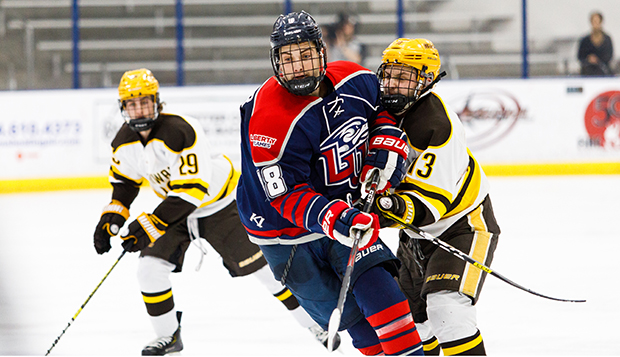 "Guys are coming back into the lineup who are a little more healthy," Flames Head Coach Ben Hughes said. "Having (freshman forward) Luke McFarlane and (sophomore forward) Darren Carter back is a huge bonus. We're continuing to refine guys' roles to where they are better suited."

"That's the last ranked team that we play and we couldn't have done any better," Hughes said after the seven-goal margin of victory. "We got the most points available to us today."

If they can stay in the top two, the Flames will receive an autobid to the ACHA DII National Championships in Frisco, Texas, bypassing the Southeast Regional tournament.

Despite only outshooting Rowan by a 32-31 margin on Saturday, Liberty dominated the game, netting two goals in the first period — by Carter and McFarlane — and three in the second and third, including two by sophomore forward Timothy Doe.

"Being able to gain some confidence with the puck was huge for us and once we started making a couple plays, we realized we could do more."

"With our goalies, they are both so good we could play either one of them at any point in time and they do a great job," Hughes said. "They both made huge saves this weekend."