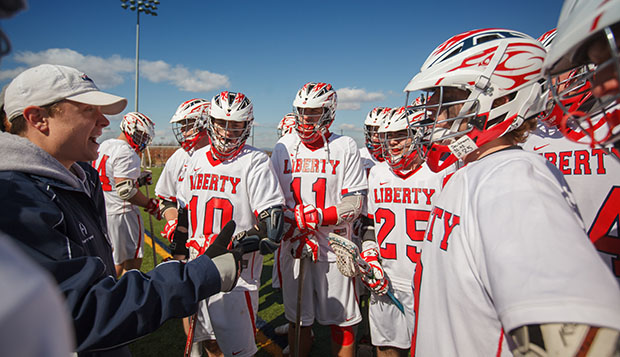 A year before moving up to Division I of the Men's Collegiate Lacrosse Association, Liberty University's men's lacrosse team, currently a Division II MCLA squad, notched its first triumph over a Division I team, Sunday afternoon at George Washington.

"It makes me feel good about moving forward," Liberty head coach Kyle McQuillan said. "It definitely is a step in the right direction and gives me confidence that we do belong at that level."

The Flames got plenty of support from a vocal visitors' section, neutralizing the hostility of playing on the road, at Mount Vernon Athletic Complex.

"We've got a lot of kids from the Northern Virginia, (Washington) D.C., and Baltimore areas and we had more fans in the stands than they did, from alumni and parents and friends," McQuillan said. "It was kind of like a home game for us."

What was most impressive about Liberty's performance was that it shut the Colonials out for the final three quarters of the contest.

"The score after the first quarter, it was 9-5," McQuillan said. "For rest of the game, they did not score. From my standpoint, it was a huge win for the defense. The fact that we were able to shut them down for 75 percent of the game was great. Our goalkeeper was phenomenal in the net."

Ethan Kamholtz, a sophomore transfer from Penn Yan (N.Y.), gave up five first-quarter goals before settling down behind the Flames' formidable defensive front, finishing with 19 saves.

"We slowly started to push and grind them down," McQuillan said. "We were very competitive and we kind of wore them down slowly. Once we got an idea of what they were doing, we were successful in implementing a sytle to shut down the guy they were trying to get the ball to."

"Our scoring was spread out," McQuillan said. "We really dispersed the ball pretty well across the board. They weren't able to formulate a counter to what we were doing on attack."

He said the Flames did a much better job of possessing the ball than they had in their opener.

"In comparison from our last game against Charleston to this game, we owned the ball when we had it," McQuillan said. "We didn't make poor decisions with the ball. The biggest thing we can take away is we really controlled the game this time. We took care of the ball, made good decisions with it."

GWU (2-2) had beaten Toledo University, 14-3, in its opener before losing to the University of Pittsburgh, which is ranked in MCLA Division I, 12-7, and defeating East Carolina, 11-4, on Saturday.

Liberty should get its first feel of spring weather when it travels south to Savannah College (Ga.) and Coastal Carolina (S.C.) next Saturday and Sunday. Savannah is ranked 15th in Division II of the MCLA, one spot ahead of the Flames, who moved up from 19th to 16th this past week.