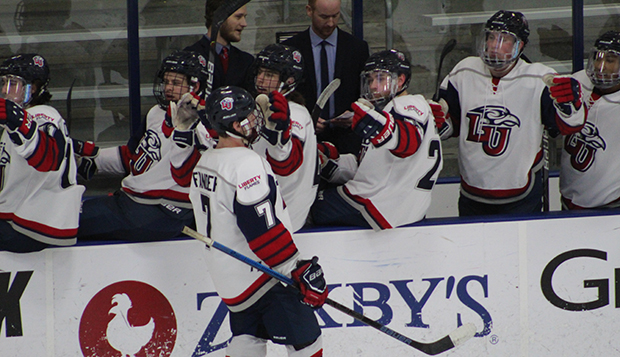 Junior forward Blake Flanders celebrates along the Flames' bench at the LaHaye Ice Center, where Liberty will host Rowan this Friday and Saturday afternoon. (Photos by Ted Allen)

Despite being shorthanded without a few key players still recovering from injury, Liberty University's ACHA Division II men's hockey team opened the spring semester by winning two out of three games over the weekend at the Miami University Showcase at Goggin Ice Arena in Oxford, Ohio.

The Flames, who ended the fall semester ranked first in the Southeast Region, improved to 21-3-1 by defeating Grand Valley 4-3 in overtime on Friday and Davenport 3-1 on Saturday before falling to Lindenwood University on Sunday, 4-0.

"It was a great weekend playing against three top teams," Liberty Head Coach Ben Hughes said. "It's definitely hard when you have some guys out of the lineup that are normally big contributors, but our team did a good job. Overall, what we came away with is we have a good team, but we have a lot to work on. We can't be satisfied."

The Flames, who outscored Grand Valley State, 45-30, opened a 3-1 lead on the Lakers in Friday's opener before pulling out the overtime victory. After a scoreless first period, Liberty and Grand Valley both scored once in the second and twice in the third.

Less than three minutes into the second, sophomore defenseman J.D. George broke the scoring ice by finishing feeds from sophomore forward Darren Carter and senior defenseman Ryley Richardson. Then in the third, sophomore forward Peyton Nash and junior forward Blake Flanders scored off each other's assist to lift the Flames to a 3-1 lead with 5:28 remaining in regulation.

The Lakers rallied for two goals in the final four minutes to tie it at 3-3 and force a five-minute, sudden-death overtime period before sophomore forward Timothy Doe netted the game-winner off assists from Flanders and junior defenseman Alex Norwinski just 17 seconds after the opening faceoff.

Against Davenport, both teams were held scoreless in the first period before Norwinski struck first just 29 seconds into the second off an assist from Flanders. After sophomore defenseman Maxx Mitchell netted the game-winner midway through the third, Flanders iced the win with an empty-netter off assists from Norwinski and Doe.

The Flames outshot the Panthers, 30-28, and sophomore goalie Dakota Cyhaniuk made 27 saves.

The Flames will be back in action this weekend with a Mid-Atlantic Collegiate Hockey (MACH) series against Rowan, set for 2:30 p.m. Friday and 1:30 p.m. Saturday

"Rowan's been No. 3 (in the Southeast rankings) for the past couple weeks so it will be a huge series for us," Hughes said. "We definitely still have some injuries, so hopefully others will step up."