Hunt, Flames ready to return to slopes this weekend in N.C. 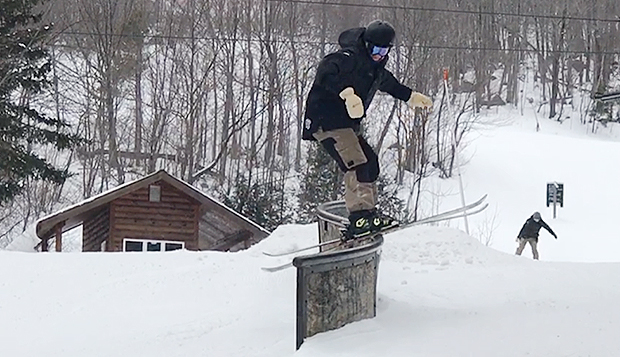 As a sophomore, John Hunt helped the Flames' men's ski team land a podium finish in the Rail Jam at the USCSA National Championships in Lake Placid, N.Y., site of this season's event. (Photo by Isaac Gibson)

Senior skier John Hunt has endured more than his share of injuries as a member of Liberty University's ski & snowboard team.

"Thankfully, they don't hold me back too much," said Hunt, who still wears an elbow pad after sustaining a hard fall his freshman season. "I bruised my ulnar nerve, which is the same as the funny bone, and it resulted in copious amounts of swelling and bruising. So, nowadays I try not to fall on it, though sometimes that's not possible."

As a sophomore at the USCSA National Championships at Whiteface Mountain in Lake Placid, N.Y., Hunt under-rotated on a back flip in the Rail Jam finals and landed on his hip, bruising the head of his femur. He still placed ninth individually to lead the Flames to a third-place overall finish, joined by then-freshman skier Cole Loomis, who suffered a knee injury, another team member who broke his collarbone, as well as an assistant coach who fractured a rib in practice at nationals.

"It was pretty funny with our team up there on the podium on crutches and in slings," Hunt said.

While injuries haven't stopped Hunt from competing, he made the difficult decision to sit out last season to focus on his studies in his junior year, when nursing majors' workload reaches a peak with extra tests, papers, and clinical hours required.

"That takes up a lot of time and mental and emotional energy," said Hunt, who spent this summer as a nursing intern at Roanoke's Carilion Hospital before returning renewed and ready to lead a much deeper and healthier Flames squad back to nationals this spring.

"I was able to give nursing my all this last year and now can go into the competition season my senior year with confidence," Hunt said. "I'm really excited to be back with my teammates."

"It is the first time we have ever had two full teams of female skiers and snowboarders," Liberty Head Coach Isaac Gibson said. "This year, hands down, is the most talented ski team we've ever had as a whole and we may be close to it with the snowboard team as well."

Hunt thrived in the Flames' three fall semester competitions, winning both Rail Jams and holding his own in a Big Air event.

"After taking a year off, John has just been killing it," Gibson said. "To be back on his skis and with his team competing again has him fired up and he's looking really solid, really consistent with the tricks that he knows."

Hunt grew up longboarding around his neighborhood and surfing on Lake Michigan in high school, as well as playing tennis, which improved his footwork and agility. He picked up skiing and snowboarding on his home slopes at Mulligan's Hollow Ski Bowl, near the shores of Lake Michigan, and Cannonsburg Ski Area.

Year-round availability to ski at Snowflex gives Hunt and his teammates an advantage over their Southeast Conference competition.

"Snowflex is a great resource, being able to show up every fall and be practicing and skiing in August when it's 95 degrees while all the other schools have to wait until winter," Hunt said.

He has enjoyed skiing on a new feature in Snowflex's terrain park, a giant PVC tube that allows for longer slides and more time on the rail to execute technical maneuvers. That also serves as a transitional element on the slopestyle course.

"Slopestyle is a combination of rails and jumps," Hunt said. "You have to be able to incorporate two different styles of riding, which allows you to display your depth of talent and creativity on the hill."

He said Loomis is the Flames' most stylish skier or rider on the team this season.

"He's a very fun rider to watch on the hill, definitely a crowd-pleaser," Hunt said of his teammate who is also a recording artist.  "He's got a very creative, flowy style, as opposed to other riders who have a more rigid or exact execution of tricks."

Hunt is looking forward to returning to Lake Placid and pursuing more podium finishes at this season's USCSA National Championships, set for March 8-14.

"I'm really excited about it," he said. "It is a beautiful area and an exciting and historic resort to ski at, with the Winter Olympics held there (in 1980). Being able to be on the same mountain as some of the world's greatest is an excellent opportunity and encouragement for us to work hard and try our best."

After completing his critical care nursing clinical hours in Roanoke and graduating from Liberty this spring, Hunt plans to launch his nursing career — working with youth and families in emergency or other acute-care settings — as well as continue his skiing career in Colorado, where he visited in December.

John Hunt crests a pyramid feature at a resort in Colorado. (Photo courtesy of Keenan Vanderoord)