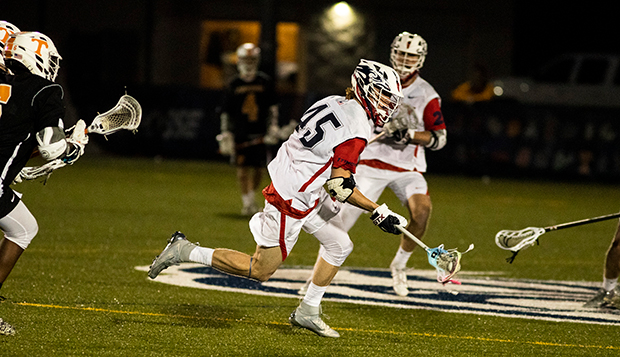 Liberty University's men's lacrosse team will fine-tune for its Feb. 8 MCLA Division I spring season opener at SELC Northwest Region rival Tennessee by scrimmaging at NCAA Division III Hampden-Sydney, a member of the Old Dominion Athletic Conference (ODAC), for the first time on Feb. 1 in Farmville.

"That will be a great test for us, especially that early in the year," Flames Head Coach Kyle McQuillan said. "We have a high level of respect for them and we expect them to be a very formidable opponent. It will be one of the most competitive teams, if not the most, we have played so it will be a great opportunity for us to test our guys and maybe expose some of our weaknesses and give us a good starting point for the 2020 season."

McQuillan has expressed interest in scheduling the University of Lynchburg, a perennial ODAC power, in the preseason, but the only teams outside the MCLA the Flames have faced in recent seasons have been NCAA DI opponent Hampton University and DIII foes Southern Virginia and Randolph College, who competed in their annual Fall Tournament.

"We have definitely been trying to get a team of this caliber to play us, not only in the fall but right before our season starts in the spring," McQuillan said. "Hampden-Sydney is a men's school that takes its athletics pretty seriously. It will be a unique and rich experience to play them on their campus and hopefully a game we can continue to have on our schedule that is beneficial for both programs moving forward."

He hopes the contest prepares Liberty for a spring regular season during which it will travel up and down the East Coast, before potentially taking a third consecutive flight out West to the May 4-9 MCLA Division I National Championships in Salt Lake City.

"It will be the first time we'll play an NCAA team on the road and good to get the experience of taking our first road trip, to get in that rhythm," McQuillan said, noting that once the season starts, the Flames will travel routinely. The Flames will be on the road to Tennessee, Florida and South Carolina over Spring Break from March 16-21, Connecticut from March 28-29, North Carolina for a neutral-site game against Georgia Tech on April 5, and Georgia for the April 24-26 SELC Division I Tournament.

"After the first couple weekends, there are not a lot of breaks on the 2020 schedule," McQuillan said. "With the number of ranked teams on the slate, it is definitely the most challenging schedule we have had to date. The guys will see a lot of the East Coast this year and we will hopefully punch our ticket to go to nationals out in Utah for the third time in three years by winning our first SELC Championship."