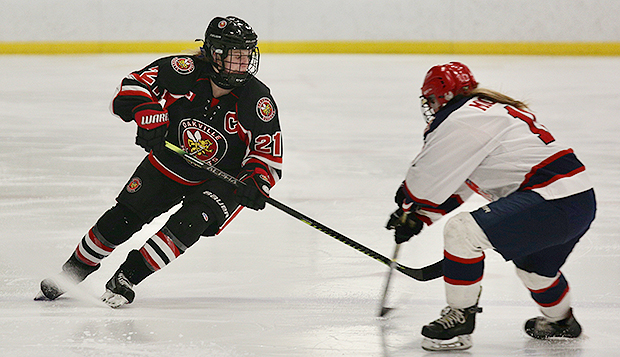 Rianna Spanier is versatile enough to contribute at forward, center, or wing for the Lady Flames starting next fall.

"We are excited to have Rianna joining us and think she will fit in great as a student and athlete here at Liberty," Lady Flames Head Coach Chris Lowes said.

She is Liberty's sixth fall commitment overall, including defensemen Kamryn Barnes and Sally Hoerr and goalie Amanda Storey, and will help fill a void at forward, where the Lady Flames anticipate graduating five high-impact players. Spanier, who serves as a captain for her hometown team, the Oakville Hornets in Ontario, Canada, has the versatility to play forward, center, or on the wing.

"Rianna is a smart hockey player that can play in both ends of the ice and in many situations," Lowes said. "She plays bigger than her size and we anticipate her being able to battle with other teams' elite players.  She can play either center or the wing and contribute for us."

Spanier previously played for the Hamilton (Ontario) Hawks, along with Fall 2019 defensive recruit Julia McDonald, and visited Liberty twice for the Hawks' preseason camps in August 2017 and 2018. She joined Foxhoven, Barnes, and Storey in the Lady Flames' Prospect Camp in April.

"We have known and been following Rianna for over two years now since her first trip to Liberty," Lowes said. "We knew she was a strong skater and good athlete early on, but have been able to watch her develop into an all-around hockey player … as an offensive threat and a shooter, over the past couple years and am excited to see what she can do here with her new teammates."

Spanier, who plans to study criminal justice at Liberty, said it was a case of love at first sight.

"I chose Liberty because of its beautiful campus and welcoming community," she said. "The team was very encouraging, and I was able to connect with girls right away. I am very excited to experience new adventures, meet new people, and travel with my teammates."

She considers herself equally adept at setting up teammates' scores and putting the puck in the net herself, using her size, quickness, and mental dexterity to her advantage.

"I'm an aggressive two way player and will always put the team first before myself," she said. "I bring speed and physicality with a large knowledge of the sport."