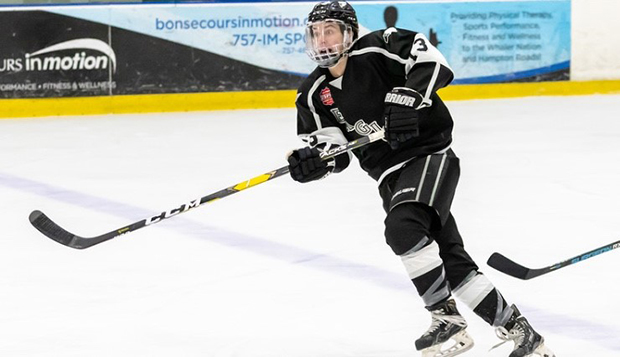 Bryce Pierce has played in the United States Premier Hockey League with the Carolina Eagles and Junior Hurricanes.

Bryce Pierce, younger brother of former Liberty University ACHA Division I men's hockey forward and head captain Devin Pierce, recently made an early commitment to join the Flames' forward lines next fall. He will have the opportunity to continue the path his older brother took before being forced to cut his playing career short last month.

"It was tough circumstances to see Devin have to leave us, but we are so excited to have Bryce committed to be a part of our team starting in Fall 2020," Liberty Head Coach Kirk Handy said. "He's got a lot of speed in his game and he's got an offensive touch around the net. He's a guy who's going to work hard every time he's out on the ice and he's going to fit our culture as far as who we want to be as a program."

Pierce, 20, alternates between right wing and center for the Carolina Junior Hurricanes, scoring seven goals and distributing four assists through 25 games this season definitely missing more than a month of action with a high-ankle sprain.

"I think I'll be a really good fit at Liberty," he said. "From what I've heard from Devin, it's an amazing culture there that I want to be a part of, and I'm absolutely pumped for it."

He realizes it will be difficult to match the impact and leadership his older brother brought to the ice and in the locker room.

"(Devin) was a huge part of the team as a head captain," Bryce Pierce said. "God led him to Liberty and he absolutely loved it there, and it changed his life. That's what has made me want to go there so bad. We share the same beliefs and … to be able to strengthen your faith and also play hockey is an awesome calling."

Like Devin, he will bring a "happy sort of energy" to the team.

"We were both energetic kids growing up," Bryce said. "Devin's personality is definitely contagious and he lights up the room. Everybody loved him at Liberty. On and off the ice, he is definitely a leader and I've always looked up to him. Whatever he did, I would want to do. We both loved hockey and wanted to play in college together, but it didn't work out."

He toured campus with his older brother and skated with the Flames over the summer, which should help smooth his transition to collegiate hockey at Liberty.

"I've been up there three times, and I've gotten to know the team pretty well," said Pierce, who beat his older brother in a speed skating time trial. "I showed the coaches that I can bring a lot of energy with my speed and my forecheck, which is one of my biggest strengths. I am more of a perimeter player and with my speed, I am able to create space and set up my teammates on the odd-man rushes."

He looks forward to the challenge of playing collegiately in the ACHA.

"Liberty's Division I team is unreal," Pierce said. "It's an awesome environment and the games are absolutely wild."

Like Devin, Bryce plans to study exercise science at Liberty.

"We are both super interested in physical therapy, him after his leg injury and me after having bad ankle injuries the past two years," said Bryce Pierce, who has been able to return to the ice at full speed this season, taking advantage of breaks around Thanksgiving and Christmas.

"I've been back for about a month after being out for about a month and a half," he said as he prepared to travel with the team to Boston for a weekend series. "With the playoff push coming up, I need to have a bigger role and start producing a little more."