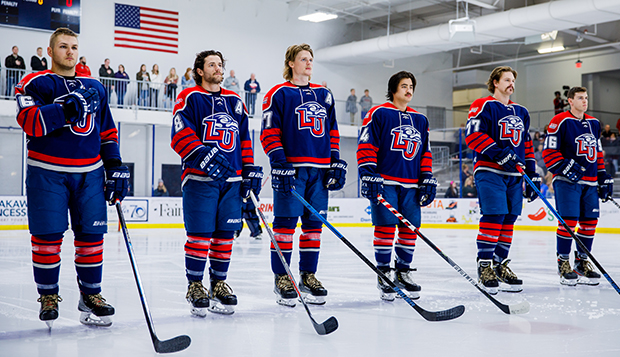 It will be a Christmas break to remember and potentially life-changing experience for 22 members of Liberty University's ACHA Division I men's hockey team and staff, who will fly out of Dulles (Va.) International Airport to Finland on Jan. 2 for an eight-day trip facilitated by LU Send.

"Something that we want all of our players to understand is how sports can be a great platform, if you use it properly, to impact the world for Jesus," Flames Head Coach Kirk Handy said. "That's real important for us for them to see it, not only here in Lynchburg, Va., but across the world as well."

"As a Club Sports department at Liberty, we want to have an intentional holistic development perspective that's both local and global," Liberty Associate Head Coach Jeff Boettger added. "We want to be intentional about seeing opportunities given to student-athletes to be able to go use the joy of the sport to be able to connect with people and share the Gospel of Jesus."

This is the fifth cultural exchange trip the Flames Division I men's hockey team has ventured on, following a Christmas break excursion to Sweden in 2007 and spring break journeys to Southern Russia in 2009, Latvia in 2013, and East Asia in 2016. Future Club Sports outreach opportunities include the men's indoor and beach volleyball teams' journey to Sweden in May, also organized by LU Send.

"The importance behind us doing the mission trip is being able to use our platform and the gifts that God has given us in hockey to be able to spread the Word of God," said graduate forward Zechariah Roberts, the lone holdover from the 2016 trip. "When I went to China, the impact that we had on the community was we'd go to universities, elementary schools, underground churches and I came back changed. I saw how blessed I am to be where God put me, especially here at Liberty."

Senior forward Quinn Ryan is familiar with traveling to Northern climates in the dead of winter after representing Liberty and Team USA at the Winter World University Games in Russia last March.

"We're all really excited for the opportunity," Ryan said. "(Club Sports Global Outreach Director) Brian Davidson, our team chaplain, was telling us the Gospel hasn't really reached Finland as much as it should, so we're going there and hoping to make a lasting impact after we leave. We're going to try to show the love of God through everything we do and say there, off the ice and on the ice. Wherever we are, we're going to be present in that moment."

"We're called in the Great Commission of Matthew to create disciples of all nations, so being able to go over to Finland and share the Word with them is an awesome opportunity for us," senior defenseman Jacob Fricks added. "That's what we're here on earth to do (but) it's not something that we get to do every day. It will give us a great platform to use everything we have through hockey to serve and give back to God for what He's given us."

"We've got 30 people going and it is a tremendous group," Davidson said. "Our purpose is to go and serve. We're there to serve others and God will speak to us in our lives and we will see spiritual growth within as well."

All of the players have raised the funds needed to cover their travel and living expenses.

"Everyone is fully supported, which is a huge answer to prayer," Davidson said. "Pray for all the youth and people hearing the message, that God would do a great work in them as well as in our own lives, that this trip will be a time of redefining purpose for many of these guys to see hockey from a different perspective."

Former Flames defenseman Jackson Kuhn played professionally in Finland in 2015 and goalie Cary Byron and forward Joe Smith played in Sweden, with Smith serving with Hockey Ministries International there and more recently back in his homeland of Ontario, Canada.

"It will be good for these guys to see how sports can connect with people socially so they can share their testimonies of how God has changed their lives," Braband said. "It would be a huge answer to prayer if someone from this trip has a heart for it and wants to go into fulltime sports ministry."

The team will be based out of the capital city of Helsinki and serve in cooperation with OM (Operation Mobilization) coordinator David Pike, an associate pastor at United Community Church.

"It will be a good opportunity to come alongside a church and use the sport of hockey to strengthen those relationships, build those bridges, and see what God does," said Davidson, who worked with Boettger, Pike, and LU Send Trip Coordinator Blake Pilgreen to establish the team's itinerary.

"We are super excited about this trip and what it might hold for our players and how they're going to interact with both teams over there and also the missionaries we're going to serve," Boettger said. "I think the preparation is always the hardest part, the fundraising, the prayer support-raising, just connecting with people. It's challenging, but it's fun, and it's faith-building all the way through."

After a cultural debriefing upon arrival on Friday, Jan. 3, the team will have opportunities to share their testimonies, and the Gospel, at youth events that night and on Saturday before helping to teach four classes at two churches on Sunday. From Monday through Thursday, the players and coaches will lead hockey clinics for elementary and middle school-aged students as well as participate in school assemblies and classes, followed by "Kids' Action Night" events set up at the church.

Players will hand out hockey cards and FCA Hockey New Testament Bibles featuring NHL players' testimonies. Davidson is challenging them to share their God stories of transformation and genuine faith with authenticity and transparency.

"Scripture has so many characters who were flawed, who had weaknesses and were imperfect," Davidson said. "A lot of our guys are the same way and we want to bring hope and share that message with the Finnish youth and everybody that God puts in our path."

A highlight of the trip will be on Sunday, when the team travels to Hämeenlinna, a town where Pike is in the process of planting another church, to play an A-Academy non-elite U-18 team.

"There is no hockey accomplishment they have previously achieved or could dream of achieving that would compare to seeing a life changed for Christ," Davidson said. "We are unable to change hearts by ourselves but we want to be ambassadors for Christ. He can use us if we are obedient and faithful to share a message, to be bold. Oftentimes in my experience, God does the rest."

Flames players and coaches, and Sparky, gather to pray after the Dec. 7 fall semester finale.