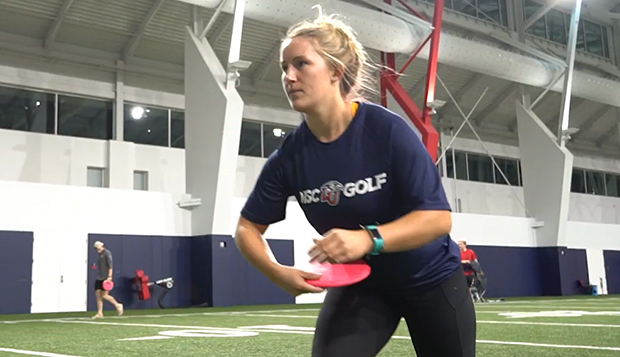 "The learning curve for the newer players is greater than ever because we did lose such a big bulk of our senior class last year," Flames Head Coach Steve Bowman said. "Having a small core that's been here for a couple years … I'm excited for that and it is a challenge of coaching that and teaching that and building those expectations and building that winning perspective."

"We've got two new freshmen, Justin (Rosak) and Stephen (Curry), who are pretty solid players and then we've got a lot of newcomers that haven't really played that much, but it looks like they're excited to get going," Curran said.

They have been instrumental in developing the younger players and maintaining the program's high standards in practice and tournament play as well as sportsmanship on and off the course.

Sophomore Grace Atkins returns from a women's tandem that finished runner-up in doubles play at last year's nationals and has teamed with senior Shannon Hons to form the Lady Flames' championship pair. They have helped introduce the sport to incoming players, encouraging them to try new approaches.

"Everyone's been super welcoming and it's been super cool to learn about disc golf since I've never played before," senior Hannah Miller said. "It's been really fun, I've met a lot of people and it's a good time."

Bowman said having veteran players serve as his liaisons in mentoring newcomers on the course is key.

"It's such a unique environment in disc golf, because we're in the woods," he said. "I really rely heavily on the guys that are returning to feed into the younger generation. It's amazing how God grows knowledge through sports to be able to put these guys into an environment where they are feeding into each other and to see these women just bond together, that's huge. They are automatic friends, they want to teach each other, they want to help each other get better."

The Flames and Lady Flames who are in the area over the Christmas break will participate in the 16th annual Blue Ridge Area Winter League (BRAWL) tournaments, which started this past Saturday in Blacksburg. That series continues this Saturday at Moneta Park with future events set for Jan. 4 at Big Branch in Bedford, Jan. 11 in Blacksburg, Jan. 25 at Timber Ridge in Bedford, Feb. 8 at Broken Oak in Monroe, Feb. 22 in Floyd, and the finals on March 7 in Bedford.