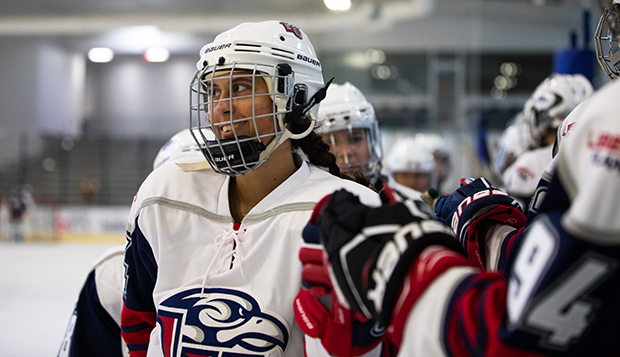 Liberty University's ACHA Division II women's hockey team is off to its best start in program history at 10-0, earning it the No. 1 ranking in the first two Southeast Region polls.

"I didn't know what to expect this semester," Leone said. "I knew we had a lot of talent returning; I just didn't know what kind of team dynamics were going to look like. We had a brand new captain this year in (senior defenseman) Holly Turner, who has been fantastic. She has done nothing but bring structure, organization, and team unity to this team. Having her at the helm with three assistant captains and having a smaller bench, the girls were ready to put the work in and so far, it's paid off."

She said the addition of three assistant coaches, former DI and DII forward Catharine (Burrell) Kelenic, Ian Dutkus, and Kevin Serapiglia, has strengthened the leadership within the team.

"They have done nothing but bring positivity and a different dynamic," Leone said.

More than anything, maintaining a good attitude on the ice and the bench as well as work ethic in practice has enabled the Lady Flames to become world-beaters, with wins over the likes of Delaware, Mercyhurst, Buffalo, and Penn State's ACHA DI program.

"The slogan for this year is progression, not perfection, and it's mainly focusing on the positivity," Leone said. "Our philosophy in the locker room is to have some fun. Once they are able to have fun, laugh on the bench, encourage one another, that's when they are going to play their best."

"This semester has been phenomenal," junior defenseman Alexis Early added. "We try to persevere with every single challenge we have been met with. We're all about having fun. The more fun we have, if we're winning, the better, because then we continue to play better."

The Lady Flames will open spring semester action with a series against Rowan, the Southeast's No. 2-ranked team, on Jan. 17-18 at the LaHaye Ice Center before traveling to face the Naval Academy on Jan. 24-26.