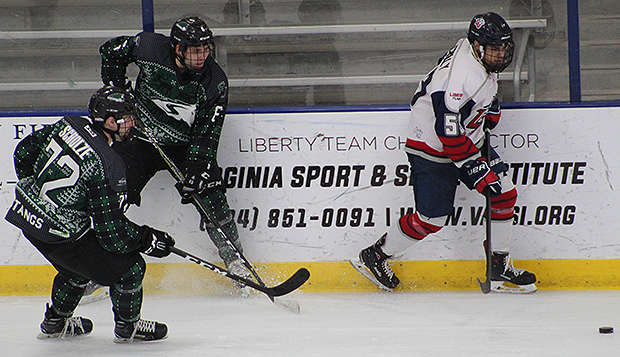 Then in the third, junior forward and Flames leading scorer Blake Flanders scored with 10:58 remaining in regulation, putting away passes from freshman forward Alex Schneider and Crilly, before Schneider capped the scoring off assists from Flanders and junior defenseman Alex Norwinski with 7:22 to go.

Sunday afternoon's rematch was tied at 2 after the first period before Liberty outscored the Mustangs 4-1 in the second period and 4-2 in the third. In a contest that featured 24 penalties, the Flames outshot Stevenson, 45-32, with Cyhaniuk making 27 saves. The five goals allowed raised his goals-against average to 1.49, which still ranks third in the nation.

Peyton Nash scored Liberty's two first-period goals, with the first assisted by Norwinski and Schneider and the second set up by Norwinski and sophomore forward Timothy Doe. Schneider gave the Flames the lead to stay 43 seconds into the second period off assists from Flanders and Mitchell before Flanders extended Liberty's advantage to 4-2 just over three minutes later, finishing feeds from Schneider and Doe.

Sophomore forward William Fortugno netted his first goal for the Flames with 14:10 left in the second period, converting assists from sophomore forward Johnny Kettelle and Mitchell, before Doe stretched Liberty's lead to 6-2 by putting away passes from Norwinski and freshman forward Jaime Ross.

After a scoreless first period in the opener, the Flames (19-2-1) netted two goals in the second and third, outshooting Stevenson, 38-22, for the game. Sophomore goalie Dakota Cyhaniuk made 22 saves to improve to 11-0 and record his ACHA Division II-leading sixth shutout of the season.

Following a month-long Christmas break, Liberty will return to action Jan. 10-12 at the Miami (Ohio) Showcase, where it will play Grand Valley State, Davenport, and Lindenwood. 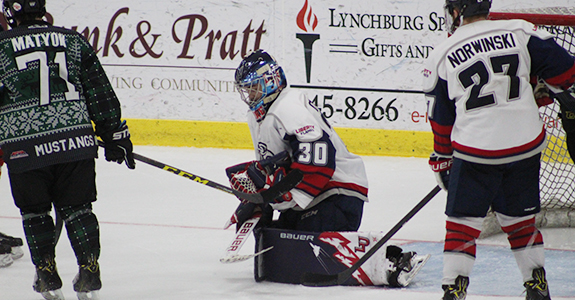 Sophomore goalie Dakota Cyhaniuk makes a save to help preserve his sixth shutout on Saturday.