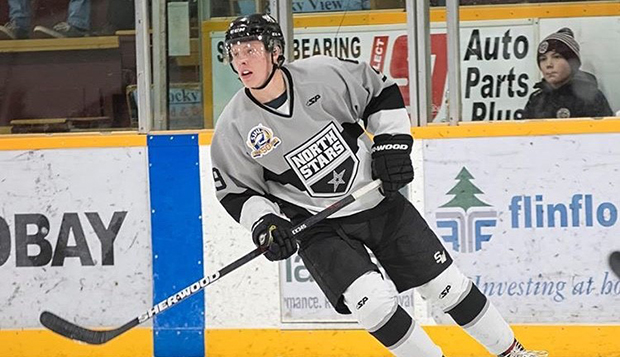 Brett Gammer scored 34 points in 57 games his rookie year and 24 points in 28 games this fall for the Battlefords North Stars in the Saskatchewan Junior Hockey League. (Submitted photos)

When Brett Gammer joins Liberty University's ACHA Division I men's hockey team as a freshman forward in January, he and junior forward Cole Gammer will form the third set of sibling pairs on the Flames this season. Senior forwards Andy and Cody Clarke and senior defenseman Jacob Fricks and his younger brother Josh, a sophomore forward and Liberty's leading scorer, are the others.

"I am very excited," said Brett Gammer, who developed a healthy sibling rivalry growing up playing hockey with Cole in their backyard in Edmonton, Alberta. "I can't wait to start school while playing hockey. It will definitely be something new to me because Cole and I have never been able to play together. As we grew up, we were always really competitive with each other. A lot of times, our backyard games on the rink got so intense they had to be shut down by Dad."

Gammer, who will turn 20 on Jan. 21, has played the past season and a half with the Battlefords North Stars in the Saskatchewan Junior Hockey League (SJHL), scoring 34 points in 57 games his rookie year and 24 points in 28 games this fall. He said the league compares favorably to the Alberta and British Columbia junior hockey leagues as well as the North American Hockey League (NAHL), where Cole Gammer played before joining the Flames in 2017.

"His team was one of the top teams in Canada, both last year and this year," Flames Head Coach Kirk Handy said. "He's been a solid contributor for them. He's an all-around solid player. He's been used to kill penalties, to play power play, and he played on one of their top lines there. We see him as a guy who can come here and add to the lineup we have."

He hopes to complement his older brother and make Liberty's forward lines even stronger.

"My goal to be an impact player right away," said Brett Gammer, who plans to study finance or accounting in Liberty's School of Business and potentially work toward his M.B.A. "I want to be an important part of the team that can help them offensively and any way I can."

He has had balanced production between goals (25) and assists (33) over the past two seasons, with six of each in the playoffs last spring.

"I'd say I like to be a catalyst, a playmaker, making the players around me better," Gammer said. "Obviously, I like to put the puck in the net. I like to do both."

Though he was always smaller than his older brother, Brett has since caught up and is now 6 feet, 190 pounds, just shy of Cole's 6-2, 200-pound stature.

"It's been a challenge my whole life, but now that we're pretty much the same size, I would be a pretty even match," Brett Gammer said. "I kind of got pummeled back in the day. He was pretty tough on me, which made me better growing up."

He has modeled his game after his older brother's, and the two could be effective linemates at Liberty.

"In a way, my game is similar to Cole's because I played against him my entire life on the backyard rink," Brett Gammer said. "He played a power forward role, driving to the net, whereas I am more shifty in the corners. I've scored a few off the rush, but most of my goals and points are scored in tight and in the cycles on moves in front of the net. I will bring some physicality to the team, especially coming from the SJHL, which is a physical league."

Handy is excited to have both Gammers available in the spring semester as the Flames look to clinch their third consecutive ESCHL regular-season title and peak in the postseason. He said Brett Gammer's versatility will be invaluable.

"That's the biggest part," Handy said. "Moving forward, we see him as a guy who can play left wing, right wing, and center for us. We are excited to get him in here.

"He's going to be a fantastic fit for the program and the hockey culture established here," he added. "He's excellent in the classroom and understands how hockey can be used as a platform to make a difference in this world."