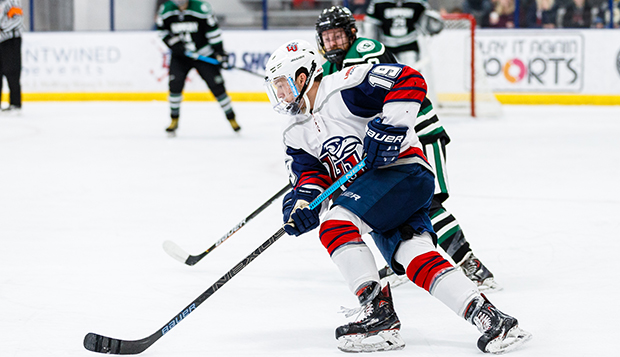 After routing The Rock 12-2 in Friday night's opener, the sixth-ranked Flames ended fall semester play by improving to 18-3 overall.

"It's a tough game to play, the last game before a break and the score being what it was last night," Liberty Head Coach Kirk Handy said. "They played a lot better tonight, and I thought we matched them OK. We could have been better, a lot better, but I was proud of our guys. They stuck with it.

"As always, we're trying to get better every time out," he added. "It was a great semester and puts us in a good spot — we've positioned ourselves for a great second-half run and we're looking forward to it."

The Flames' attack received a much-needed break to end a scoring drought late in the first period when senior forward Victor Blomberg was awarded a fluke goal as he appeared to be penalized along the back boards. Blomberg controlled the puck before being slashed as he skated back across the end line. As he fell to the ice, he inadvertently slid the puck back inside the left post, past Slippery Rock goalie Kevin Belanger, for a 1-0 lead 1:47 before the first intermission.

Just over three minutes into the second period, Liberty doubled its lead to 2-0 when senior forward Brock Thompson picked up the puck off a faceoff won by sophomore forward Matt Bartel in the right circle and beat Belanger with a shot from deep in the left crease.

Sophomore forward and leading scorer Josh Fricks extended the Flames' advantage to 3-0 by receiving a beautiful cross-crease feed from senior defenseman Garrett Nelson and lifting a one-timed shot into the upper netting at the 13:43 mark.

After The Rock (6-8) ended the shutout for Liberty sophomore goalie Tyler Myers when Antonio Esposito capitalized on a turnover in the Flames' defensive end and converted on a quick breakaway at the 5:15 mark, Ryan struck twice in a span of less than a minute to cap the second-period scoring. First, skating through the left crease, he deflected a shot from the slot by Nelson through the five hole with 3:44 left. Then, just 14 seconds later, Fricks deftly tucked a pass back to sophomore forward Arturas Laukaitis who flipped it over to Ryan near the left post for a point-blank finish and a commanding 5-1 Liberty lead.

"Everyone's working really well together and it's been fun," Fricks said. "All of our points are assisted by two guys, not many of them are single-assisted. We're all working together and it makes it easy."

Ryan completed his natural hat trick with a third consecutive goal with 12:37 left in the third period, redirecting Nelson's shot from the point from near the right post with the Flames on a power play.

"He's an unreal player and when he wants to score, he can score as many as he wants, really," Fricks said. "He and Arty (Laukaitis) are both really fun to play with, and I couldn't ask for two better linemates."

With the Liberty back on the man advantage in the final 1:39, Laukaitis put The Rock to rest with a putback in the left crease of a shot by Nelson launched from the right point.

The Flames outshot Slippery Rock, 53-19, and the two teams combined for 20 penalties in a physical battle with plenty of extracurricular exchanges.

After finishing final exams this week and returning home to celebrate Christmas with family and friends, the Flames will enjoy a shared cultural experience on a trip to Finland from Jan. 2-10, with hockey games and youth clinics among the events on the itinerary.

"That's going to be fantastic, something I'm looking forward to, not only for my own life, but the lives of the guys here," Handy said.

The Flames will return to the LaHaye Ice Center to resume ESCHL play as they prepare for the 2020 postseason with a series against Delaware on Jan. 17-18.