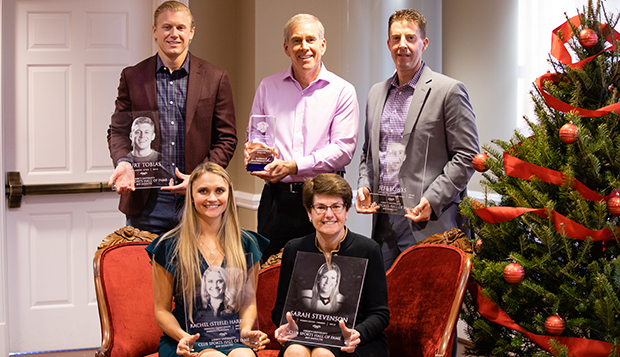 Presenters and honorees spoke candidly about the relationships formed through Liberty Club Sports programs, which have endured longer than their playing careers and brought much greater fulfillment.

Tobias, the Flames' men's lacrosse team's second-leading all-time scorer with 166 goals and 73 assists, was accompanied by fellow attack Ryan Miller ('15), who eclipsed his scoring record by the time he graduated. His presenter was long-stick midfielder and current Assistant Coach Mike Zumpano, who was instrumental in helping Head Coach Kyle McQuillan restart the team in 2009.

"We really were the trailblazers of the program," said Tobias, who recognized that his offensive numbers helped the team transition from MCLA Division II to I in 2014, but will soon be forgotten. "I know for a fact it's not about the goals … it's about the souls that you are playing with out there. That's a great platform to reach out to a community that revolves itself around athletics. I love being a part of a school that reinforces that foundation in Christ, to be able to play sports and enjoy those things of life."

Zumpano said witnessing Tobias' authenticity on and off the field and spiritual focus was transformational in his life.

"In one of our conversations, he said, ‘If we're not impacting peoples' lives, if we're not bringing the light of Christ to people, then what are we doing?'" Zumpano said. "It was very simple and profound, but when he said that, it kind of clicked in me that that's what Kurt's always been about."

Harrison helped found Liberty's gymnastics program after asking permission from Liberty President Jerry Falwell Jr., who would become a member of the Club Sports Hall of Fame's inaugural class in 2014. She said the sport has helped dozens of student-athletes to find balance in their academic, athletic, spiritual, and social lives over the past 10 years.

"I spent my life in the gym training, working, building relationships, learning to flip, but most importantly, learning how to live," Harrison said. "Sports are really good at teaching you life lessons that you can carry with you."

"The Lord plants dreams in our hearts for a reason and when we lean in and trust in His goodness, instead of trying to navigate the way on our own, He provides an answer that is far beyond what we can imagine," Harrison said.

"Rachel drove her team to success with her slogan, ‘Adapt and overcome,'" Comena said. "Throughout her years as an athlete, Rachel's dedication to push herself to be the best that she could be took Liberty to nationals each year and brought back countless awards. As a coach, she's taught resilience to all of her athletes and built a personal relationship with each one. Selfless, committed, unfailing, visionary, timeless, and warrior were all words used to describe Rachel when I spoke with her past teammates, athletes, and coaches."

The most tearful presentation was saved for last in memory of Stevenson, represented by her parents, Ian and Janet. The traveled from Ontario for the ceremony after dozens of her teammates, coaches, and friends at Liberty journeyed north of the border for her memorial service after her untimely death on Oct. 31, 2017.

"Her presence brought a confidence that was deeply admired," Pinel said. "She held everyone to a higher standard through her attitude and her actions. Our beloved No. 11 was a purpose-driven, spirit-filled athlete with a true love of this game. Her soft and calm presence brought reassurance and she could be counted on in any situation.

"Her talents and passion ignited the flame for our team and year after year, she just increased the heat," she added. "The camaraderie and sisterhood ran as deep as the fire in our hearts and the ice in our veins. With her help, our team continued to become more successful every year."

In her senior season, when she helped lead Liberty to its first national championship, Stevenson earned All-America honor and was selected as Liberty's Forward of the Year, an award that has since been named in her memory. But her legacy as a Champion For Christ is far more significant.

"Our great, big God had plans for our Sarah," Pinel said. "He knew that her heart would be changed here, that she would come to know Him and accept Him as her Savior and continue to shine brighter. We all knew, and it's fair to say, Sarah was way too good to play for us, but I am so thankful for our God and that Sarah's path led her to Liberty, led her to us, and ultimately led her to Christ."

She became the first ACHA women's hockey player to be drafted to play professionally, signing with the Toronto Furies for the 2015-16 season. She never forgot her Lady Flames teammates, who became like an extended family for the four years she spent at Liberty.

"Sarah was blessed with being a great skater, but more so being a team player," Ian Stevenson said. "She always put the team ahead of herself. Sarah would be very happy to know that she is going into the Club Sports Hall of Fame with her teammate Stacey (McCombe, who was inducted last December.) They were the perfect pair. Stacey was a goal-scorer and Sarah liked to assist."

Stevenson is still Liberty's third-leading all-time scorer with 55 goals and a program-record 109 assists.

Jeff Lowes ranks among the leading scorers in Liberty's Division II history and was named Atlantic Coast Conference Hockey League (ACCHL) Forward of the Year twice during his career from 1997-2001 before being inducted into the ACCHL Hall of Fame earlier this year.

"On the ice, Jeff could do a little bit of everything," said Liberty ACHA DI women's hockey Head Coach Chris Lowes, who played three seasons with his older brother on the Flames' DII team and served as his presenter. "He was a great goal-scorer and offensive weapon, very good defensively. We knew that we needed him to show up in the big games."

Jeff Lowes, who now serves as an associate professor in Liberty's exercise science department and as a chiropractor for the Flames Athletics' Sports Medicine team as well as running his own practice, Virginia Sport & Spine Institute, in Lynchburg, had the opportunity to treat a number of Stevenson's injuries throughout her career, especially after stepping down as DI men's assistant coach following the 2011-12 season.

"She was a very resilient, very powerful young lady and is greatly missed, but she had a big impact in her short life here," he said.