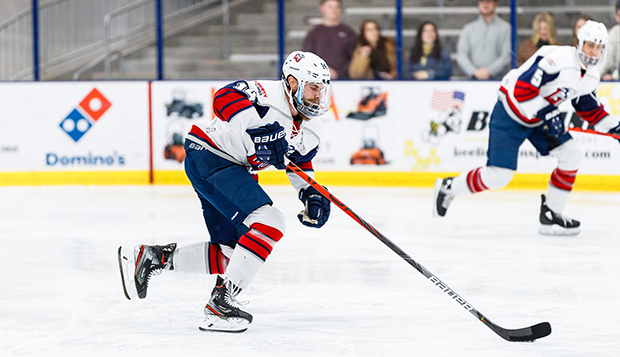 Senior forward Andy Clarke skates the puck out of the defensive zone to ignite a Flames' fast break. (Photos by KJ Jugar)

The Flames (17-3), who outshot The Rock 60-15 on the night, needed just two minutes after the opening faceoff to sound the goal horn when Clarke received junior forward Jordan Bochinski's assist from behind the cage for a one-timed finish in front.

Slippery Rock (6-7) netted the equalizer with 14:20 left in the first when Trevor Gilliland picked up a loose puck after a faceoff in the offensive zone and skated along the left end line before threading a shot past Liberty freshman goalie Cédric Le Sieur inside the right post.

With 2:24 left in the first, Clarke sliced through the slot and deflected senior defenseman Basil Reynolds' shot from the top of the left circle past The Rock's goalie Jon Szynalski for a 2-1 Liberty lead.

"Andy Clarke had a big night for us again," Flames Head Coach Kirk Handy said. "He's been great for us. It's nice that he's being rewarded with some goals because he's solid in all other areas. He's really playing well right now."

"Usually, I'm looked on as more of a defensive forward and I'm strong on the PK so it's always surprising for me to support the team in that way," Clarke added.

Then, at the 1:02 mark, Ryan skated the puck up the right wing and through the right circle before cutting across the crease and tucking the puck inside the right post for a 3-1 advantage.

Just 1:35 into the second period, Slippery Rock forward Jamie Mauro, who paced the ACHA in scoring last season, trimmed the deficit to 3-2 by taking a short feed from Gilliland in the slot and lifting a wrist shot into the upper netting.

"We had some breakdowns on the first two goals they scored," Handy said. "Guys have had exams all week and it took us a bit to settle in."

Le Sieur had the posts to thank for keeping Jacob Hickey from tying the contest as he hit them both on a point-blank shot and rebound. Le Sieur stepped up and stopped a breakaway opportunity by Mauro midway through the second period.

The Flames capitalized by scoring six goals over a period of eight and a half minutes — the last three in a span of 34 seconds — starting at the 10:59 mark, when Ryan received senior forward Brock Thompson's pass from behind the right side of the cage and buried his shot from out in front for a 4-2 advantage.

Just 42 seconds later, freshman defenseman Colin Baird took a pass off a faceoff and rifled a shot from the left point through traffic, including a screen by Bochinski, past Szynalski.

Then, at the 7:42 mark, Thompson took a long cross-ice assist from senior defenseman Garrett Nelson in the right circle and fired his shot off the arm of Szynalski inside the near post, stretching the Flames' edge to 6-2.

With 3:03 left in the second, Nelson controlled a pass from Clarke in the high slot and launched a missile that found the back of the net. Then, Thompson sent a backwards pass as he skated toward the right corner to sophomore forward Josh Fricks, who stuck the puck through the five hole from point-blank range 2:39 before the second intermission. Finally, 10 seconds later, Fricks capped the second-period scoring by intercepting a failed clear from behind the goal by a Slippery Rock defenseman for an easy finish in the left crease.

The Flames added three goals in the third, the first by sophomore forward Devin Melice, who one-timed a shot off a faceoff won by Clarke in the right circle into the lower left corner of the cage, extending Liberty's lead to 10-2 at the 17:06 mark.

Then, with the 13:40 left, Baird sent a long outlet pass to Ryan beyond The Rock defense and completed his hat trick by finishing his breakaway with a backhand through the five hole, pushing the edge to 11-2.

With 7:30 to go, sophomore forward Arturas Laukaitis capped the scoring by finishing feeds from Melice and senior defenseman Chaydan Lauber, lifting a top-shelf wrist shot from inside the left circle.

"We need to make sure we're dialed in again (Saturday)," Handy said of the rematch that will again be webcast live by LFSN and carried by ESPN+ starting at 7 p.m. back at the LaHaye Ice Center. "This game's over and we need to refocus our attention on the last game of the semester."

Before Friday's contest, members of the sixth Club Sports Hall of Fame class that will be enshrined on Saturday afternoon were honored and former Lady Flames ACHA DI women's hockey coach Paul Bloomfield helped present a framed No. 11 jersey to Ian and Janet Stevenson, parents of former All-American forward Sarah Stevenson, who will be inducted posthumously. 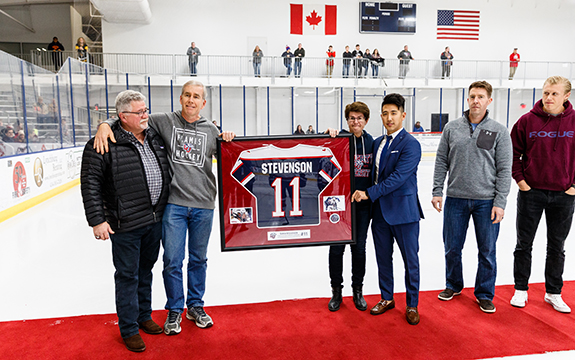 Former Lady Flames Head Coach Paul Bloomfield and Assistant Coach Jonathan Chung present a framed jersey of Sarah Stevenson, who will be inducted posthumously into the Club Sports Hall of Fame on Saturday, to Ian and Janet Stevenson before Friday night's game against Slippery Rock.