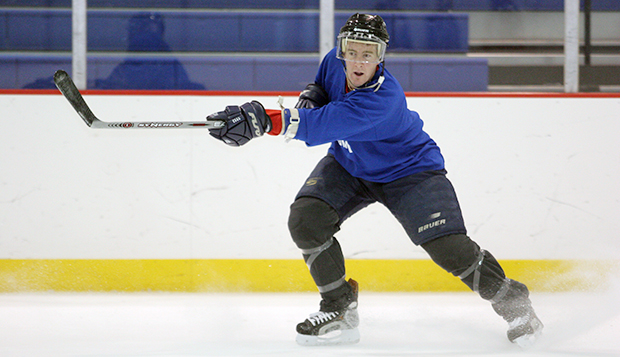 Jeff Lowes participated in an alumni game in 2006, his first season as an assistant coach for the DI men's hockey team.

Former Liberty University men's hockey forward Jeff Lowes, a two-year captain for the Flames who earned Atlantic Coast Conference Hockey League (ACCHL) Forward of the Year honors twice, will be one of four inductees in the Club Sports Hall of Fame's sixth annual class on Saturday afternoon at the Hancock Welcome Center.

A native of Peterborough, Ontario, where hockey is a way of life, Lowes first picked up a stick at the age of 3 and rose through the junior ranks with plans to pursue a collegiate career at a Canadian university.

That was before he received a timely phone call in 1997 from fellow Ontario native Kirk Handy, then a rising sophomore forward with the Flames.

"At the last minute, I came down to Liberty and fell in love with the campus — which was nothing like it is today, but still very attractive," Lowes said. "It was cool to have the opportunity to play with like-minded individuals in a hockey program that was supported by the university and on an upward swing."

The two coached together for seven seasons — the first at the DII level, when they guided the Flames to their first ACHA national championship final in 2005-06, and the next six as a DI program. Lowes followed Handy, who was inducted in 2015, into the ACCHL Hall of Fame Class of 2019.

Some of his best memories as a player were made during the three seasons he got to play on the same team as younger brother Chris Lowes, a defenseman who went on to coach the DII men's team for nine seasons before leading the DI women's team to back-to-back national championships the past two years.

"That was one of the biggest highlights of my career because, being two years apart, we never got to play together growing up," said Jeff Lowes, who helped recruit Chris to the Flames. "We played a lot of pond hockey in the winters and road hockey in the summers, as well as mini sticks in the basement, but never played on the same team until we got to Liberty."

Chris Lowes will serve as his older brother's presenter at Saturday's induction ceremony.

"He's one of the best hockey players I ever played with, a guy who you wanted on the ice because of all that he brought," he said of Jeff, who ranks among the Flames' all-time leading scorers at any level. "He led by example. He played tough and physical, and was also a goal-scorer who could produce. He has that desire to do great things and you could see that in hockey and other areas of his life. He strives for excellence and other people are drawn to him."

Since graduating with a degree in exercise science in 2001 and receiving his doctorate from New York Chiropractic College in 2004, Lowes has experienced a phenomenal career in the field of chiropractic care, culminating in opening a new office in Lynchburg, the Virginia Sport & Spine Institute, in 2018.

Now in his ninth year as an associate professor in Liberty's exercise science department, Lowes started practicing as a team chiropractor on the Flames Athletics' sports medicine staff in 2005. In that role, he serves student-athletes from all 20 NCAA Division I programs and 41 Club Sports teams, working in conjunction with team physicians, athletic trainers, orthopedists, and physical therapists.

"Having the opportunity to come back and be involved in working with student-athletes at Liberty is a blessing to give back and know what they're going through, because I've been there myself," Lowes said.

In addition to Liberty student-athletes, through his private practice Lowes also serves others at nearby Randolph College and the University of Lynchburg as well as the Lynchburg Hillcats minor league baseball team.

His passion for his profession is as evident in his workplace as his dedication to the sport was on the ice.

"You can see that in his role as a teacher and it translates to way he treats his patients," Chris Lowes said. "His real passion comes through and his love of it. He commits a lot to the things he does and that really resonates. He did that as a student and as an athlete and now as a professor and as a doctor."