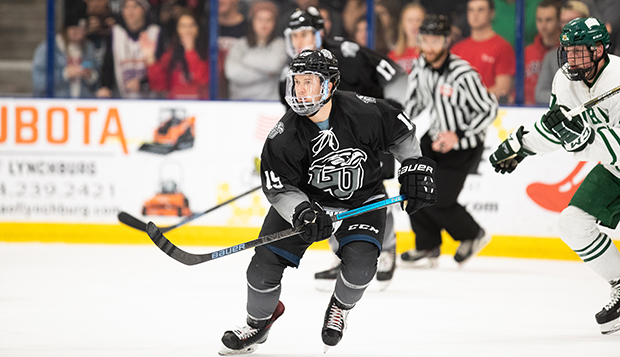 Liberty University's ACHA Division I men's hockey team, coming off back-to-back weekend trips to New York and a much-needed Thanksgiving break, will take a breather from exams this weekend to close out its fall semester schedule with a home series against Slippery Rock.

The Flames, who are gearing up to spend part of their Christmas break on mission to Finland from Jan. 2-10, hope to continue to build momentum for the spring semester in preparation for strong postseason performances in the ESCHL Tournament in February and ACHA DI National Championships in March.

They will rely heavily not only on the leadership of 14 seniors, but also the influx of talent and energy from a solid class of recruits that includes sophomore forwards Arturas Laukaitis (9 goals, 14 assists) and Matt Bartel (7G, 8A), who have both scored four power-play goals.

Sophomore Dmytro Kobylyanskyi has complemented a strong defensive corps that features freshman Colin Baird (5G, 10A), who distributed four assists in an 11-1 season-opening rout of Duquesne before scoring two goals and assisting a third in an 8-2 'Midnight Mayhem' win over Ohio.

Saturday's rematch at the same time and place will be a Faculty and Staff Appreciation Night, with free tickets for Liberty employees and up to five family members available for pickup on Thursday by 5 p.m. at the LaHaye Ice Center.

Liberty Scouting Report: The Flames, who remained at the No. 6 spot in last week's ACHA Division I rankings, are 9-0 at home this season, including an incredible 5-4 come-from-behind shootout win over Ohio that completed a Nov. 8-9 sweep of the Bobcats in their last home series.

Sophomore forward Josh Fricks paces the attack with 17 goals (including three game-winners) and 17 assists, tied for 10th in ACHA Division I, followed by senior forward Quinn Ryan (8G, 21A) and junior forward Jordan Bochinski (9G, 17A). Brock Thompson (9G, 4A) has scored four times on the power play and fellow senior forward Andy Clarke netted two goals and two assists in a sweep at Syracuse before the Thanksgiving break.

Jamie Mauro (10G, 13A), who led ACHA Division I and set Slippery Rock scoring records with 44 goals (including six game-winners) and 38 assists last season, currently leads the team, with fellow forwards Trevor Gilliland (13G, 5A) and Antonio Esposito (4G, 9A) the only other double-digit scorers. Slippery Rock graduated Thomas Kimmick, who ranked second in the ACHA in scoring last year with 43 goals (including six game-winners) and 33 assists.

Coaches: Kirk Handy is in his 20th season as Liberty's head coach and has compiled an overall record of 448-183-29. Dave Grimm, who played forward for Slippery Rock from 2004-07 before serving as an officer in the U.S. Army for a few years, is 54-53-8 in his fourth season at the helm.