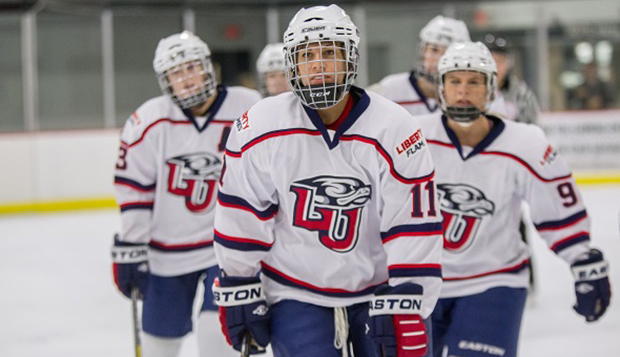 Sarah Stevenson emerged as a leader for the Lady Flames on and off the ice through her work ethic and by mentoring younger teammates. (Photo by Kevin Manguiob)

Former Liberty University ACHA Division I All-American forward Sarah Stevenson will be represented by her parents, Janet and Ian Stevenson, when she is inducted into the Club Sports Hall of Fame's sixth class this Saturday afternoon at the Hancock Welcome Center.

Stevenson, who died in her home province of Ontario at the age of 24 on Oct. 31, 2017, from a sudden onset of Neisseria Meningitidis, will be the first of the Club Sports Hall of Fame's 19 members to be honored posthumously.

Known for her kindness in mentoring younger teammates and her tenacious work ethic and selflessness on the ice, Stevenson accepted the Lord as her personal Savior early in her career at Liberty.

"She really grew as a person and especially in her faith," former Lady Flames teammate and current Assistant Coach Madison Pinel said. "That was really cool to see."

"For somebody to come into Liberty that could arguably at that point have been too good of a player to play at Liberty, it's interesting to see," Liberty Assistant Coach Justin Forth added. "You never know why, but God's got a plan and I believe that God executed His plan perfectly for Sarah."

As a senior in 2015, Stevenson helped guide Liberty to its first ACHA DI national championship before becoming the ACHA's first player to be drafted by the Canadian Women's Hockey League. She was the Lady Flames' first player to sign a professional contract in the sport, spending the 2015-16 season with the Toronto Furies.

"On the ice, she was definitely that player that kept pushing, kept going," said Pinel, who will serve as Stevenson's presenter on Saturday. "You wanted to keep up with her and sometimes, you just couldn't. She was just so driven, so hard-working, and so humble about it. She was able to share that passion and ignite it on the whole team."

Stevenson was one of seven seniors on the Lady Flames' first national title-winning team in 2015, when she led the team in assists and ranked second in scoring. She saved some of her best hockey for last, when it mattered most, scoring four goals and distributing four assists in five postseason games before being selected to the ACHA DI All-Tournament Team.

"She was the epitome of a hard working girl and a great teammate," said Forth, who coached Stevenson from her freshman through junior seasons. "She always wanted to get better and to be her best and her hard work and love for the game rubbed off on her teammates. She was a big part of the success that the team had those four years and played a major role in winning the championship."

Stevenson graduated as Liberty's all-time leader in assists with 109 and added 55 goals to rank third in scoring with 164 points in 134 games. She also ranked third by capitalizing on four shorthanded goals, showcasing her speed and opportunistic flair.

After graduating with a B.S. in Criminal Justice and a minor in psychology, Stevenson was pursuing a career in law enforcement after serving as a marine officer with the Ontario Provincial Police.