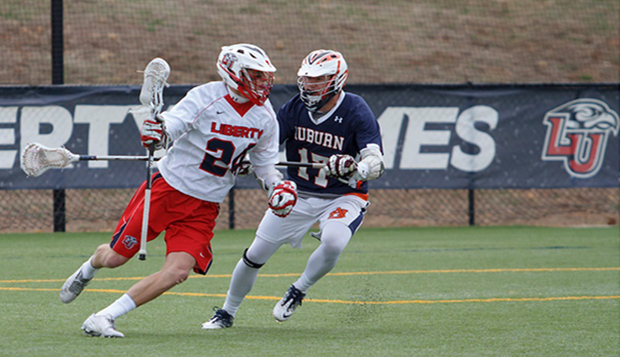 Kurt Tobias, shown in a March 29, 2014, game against Auburn at the Liberty Lacrosse Fields, used his size and speed to spark the Flames' fast-break attack. (Photo by Lizzy Benson)

Former Liberty University's men's lacrosse attack Kurt Tobias ('14), who helped elevate the program as it transitioned from the MCLA Division II to the Division I level, will become the team's second representative in the Club Sports Hall of Fame after this Saturday afternoon's induction ceremony at the Hancock Welcome Center. He follows Jeremy Kortright, who was inducted in 2015.

Blessed with great vision, size at 6-feet, 3-inches tall, and a knack for being at the right place at the right time, Tobias emerged as the Flames' all-time leading scorer by the time he graduated with 166 goals and 73 assists for 239 points, a record soon surpassed by fellow attack Ryan Miller ('16).

"The two of those guys together formed the most lethal combination in team history," Liberty Head Coach Kyle McQuillan said.

Their rivalry, formed when Tobias played at Lake Braddock High School and Miller was at nearby Annandale, Va., was quickly transformed into a friendship as fellow Flames, and translated into tremendous success on the field.

"He was a huge part of us being able to move the ball and get a reputation of being a fast team that could score quickly," McQuillan said. "I'm not sure if we have ever been as dangerous as when we had Kurt Tobias on the fast break."

He was selected to the first-team All-SELC Division II in 2012, second-team SELC Division I in 2014, and third-team All-America Attack in 2013, when he helped lead Liberty to the MCLA Division II National Championship semifinals.

One of the highlights of Tobias' career came on Senior Night in 2014, the Flames' first season at the MCLA Division I level, when he netted two goal-ahead goals in the third quarter of a 10-8 triumph over SELC Northwest Region rival Virginia Tech, played on Good Friday at the Liberty Lacrosse Fields.

"That game was such a good representation of our team pulling together and really showing what we were made of, showing the character and the work that we had put in all year," Tobias said.

But much more lasting than the memories made on the field were the experiences shared with teammates and classmates on his journey through Liberty.

"College was a very defining stage of life that teaches you so much moving forward into the workforce," Tobias said. "The training and preparation a young man receives through a college sport is unmatched, especially at Liberty, but it is much more than about points scored and games won. It's those relationships that you carry with you the rest of your life and the lessons learned along the way."

Tobias, who earned a B.S. degree in Information Systems, launched his career at an electronics manufacturing company in Lynchburg, Va., and now serves as a quality engineer at Leonardo DRS, Inc., a contracting company for the U.S. Department of Defense in Destin, Fla.

At Saturday's ceremony, he will be joined by his wife, Lindsay (Foreman) Tobias ('17), a former member of the Lady Flames women's volleyball team, and presented by Zumpano, his teammate for all four seasons at Liberty and lifelong friend who has served on the Flames' coaching staff ever since.