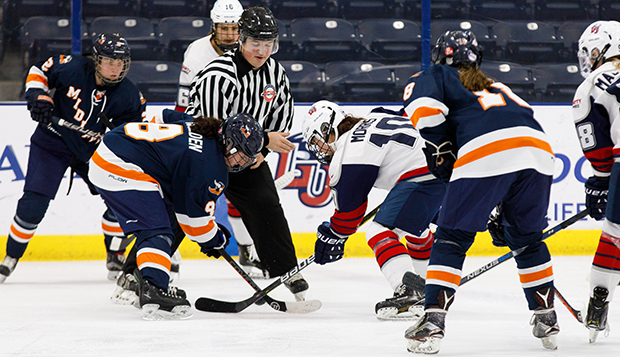 Liberty University's ACHA Division I women's hockey team, the two-time-defending national champions, remained at the No. 1 spot in the third ACHA DI rankings released last week after sweeping Miami (Ohio) University in its final series of the fall semester on Nov. 22-23.

Before the start of this season, the Lady Flames joined the first-year Women's Midwest College Hockey League (WMCHL), which has all six of its teams ranked in the top 10 — Liberty at No. 1, Lindenwood-Belleville at No. 2, Minot State at No. 4, McKendree at No. 7, Minnesota at No. 8, and Midland at No. 10.

They also platoon two of the top five goalies in the league. Senior Nadia Rupoli (9-1) ranks first with a 96.0 save percentage and second with a 0.92 goals-against average and is the program's all-time leader in shutouts with 19, including an ACHA-best seven this season. Freshman Kayla Savoie-Penton, also 9-1, ranks fifth with her 1.27 GAA and 10th with her 92.1 SP and has added two shutouts.

When it opens spring semester play against Grand Valley State on Jan. 17-18 at the LaHaye Ice Center, Liberty anticipates the return of junior forward and team captain Shannon Fehr, who sat out the fall semester due to injury, and collegiate debut of freshman defenseman Julia McDonald, who will turn 18 over the Christmas break to meet ACHA eligibility requirements.

The Lady Flames have six ACHA games left on their schedule, including a Feb. 8-9 showdown at No. 3 Adrian College, a rematch of the 2018 national championship game, won by Liberty in Columbus, Ohio, before playing two more exhibition games at the Washington Pride on Feb. 28-29. They will then compete for their first WMCHL tournament championship March 6-8 in St. Louis before returning to Frisco, Texas, to try to three-peat as ACHA DI national champions.