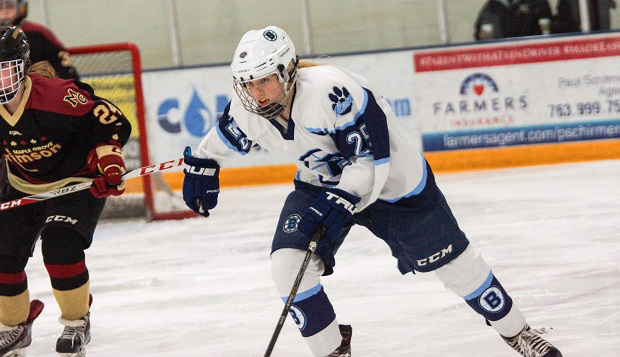 Liberty University's ACHA Division I women's hockey team has landed its first commitment for Fall 2021, Brielle Fussy, a forward from Minnesota who is the younger sister of the fifth Fall 2020 recruit, fellow forward Brityn Fussy.

"Playing with my sister for a few more years will be amazing as well since I've been playing with her my whole life," Fussy said.

"It is a special experience to play college hockey with your sibling," added Lady Flames Head Coach Chris Lowes, who played three seasons with his older brother Jeff in the early 2000s. "There is a long history of siblings attending Liberty and playing hockey together on the men's side, so it will be a neat thing to see on our team."

After playing together for three seasons at Blaine (Minn.) High School and with the Minnesota Advancement Program (MAP), Brielle Fussy and her older sister will bring unique styles of hockey to the Lady Flames.

"Brielle is a talented athlete that has a bright future as a Flame," Lowes said. "She has a lot of the same strengths as her sister Brityn, but they are also very different hockey players. Brielle is a smooth and technical skater, is comfortable with the puck on her stick, and has great awareness. They will bring a nice balance to our forward lines and contribute in many ways."

Both made official visits in October before finalizing their college choices in November.

"Brielle is a solid two-way hockey player and the fact she has another two seasons to develop in high school is exciting," Lowes said. "She skated with us in October and did not look out of place with our current team at all. She was on the ice with girls five to six years older than her and competed hard and showed her talent."

Brielle Fussy, who has scored five goals and added 11 assists in 32 games as a sophomore and early in her junior season at Blaine High, is looking forward to complementing her sister in Liberty's attack.

"I'm a hard-working and determined player," she said. "I love getting better every day and will do anything to be the best player I can be. I have a lot of knowledge about the game and think I will be a playmaker on the team. I believe whoever has the best chance to create opportunities should have the puck … whether it's my teammate or myself."

Fussy, who is considering majoring in biology or youth ministries, is even more excited about growing athletically as a player and spiritually and socially as a person.

"I'm mostly excited to see what God has in store for me here — to have a new level of hockey to play at and to meet new people that share the same love for the game as me," she said.