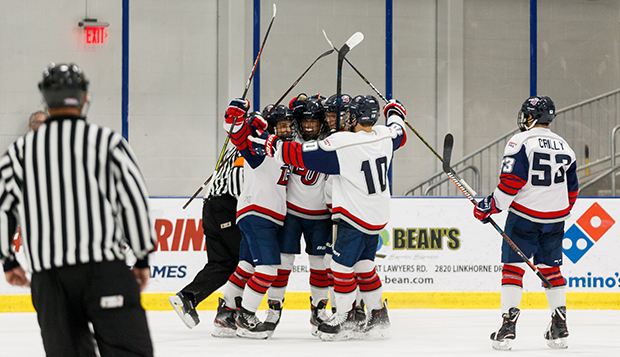 The Flames celebrate a goal in a game this season at the LaHaye Ice Center. (Photo by Ellie Richardson)

The Flames (15-2-1, 5-1 MACH) were shorthanded, with junior forward Michael Niederer, sophomore forward Timothy Doe, and freshman forwards Luke McFarlane and Josh Wagner sidelined by injuries, so Flanders stepped up and sparked the attack against the Blue Hens (9-7, 3-3).

"Defense was huge this weekend for us, especially missing three of our leading scorers," Liberty Head Coach Ben Hughes said. "We knew we were going to have to spread our offense out and play sound defense to come out on top."

In the opener, sophomore forward Darren Carter ended a scoreless tie just over five minutes into the second period with a goal assisted by graduate defenseman Drew Crilly and junior forward Aaron Partridge. Flanders netted the next three goals, the first off assists from junior defenseman Alex Norwinski and sophomore defenseman J.D. George with 6:52 left in the second period. He added two more scores in the third — the first set up by freshman forward Alex Schneider and Crilly at the 11:43 mark and the last assisted by sophomore forward Peyton Nash with 7:15 to go.

After a scoreless first period in Saturday's rematch, Flanders recorded the game's first goal with 11:54 left in the second, finishing feeds from Schneider and sophomore defenseman Maxx Mitchell. Schneider doubled Liberty's lead to 2-0 with 16:20 to go in the third, off assists from Mitchell and sophomore forward Charlie Wilkie, before Flanders capped the scoring unassisted with 14:55 remaining in regulation.

"We were really pleased with how we played as a team," Hughes said. "Both games were not super high-scoring, but we played very disciplined and stuck to our system very well. It was encouraging from a coach's perspective to see them execute the game plan like they were supposed to."

The Flames outshot the Blue Hens 31-17 in the first game and 45-26 in the second and junior Adam Partridge and sophomore Dakota Cyhaniuk posted back-to-back shutouts in goal.

"Both played really well," Hughes said. "It is great to have two reliable goaltenders, which is something you need when you go to nationals because it is tough for a goalie to play five games in five days."

Liberty, ranked No. 1 in the Southeast Region, will conclude the fall semester with a series against Stevenson on Dec. 7 at 10 p.m. and Dec. 8 at 11:30 a.m. at the LaHaye Ice Center.