Former Lakers defenseman to play for Lady Flames next fall 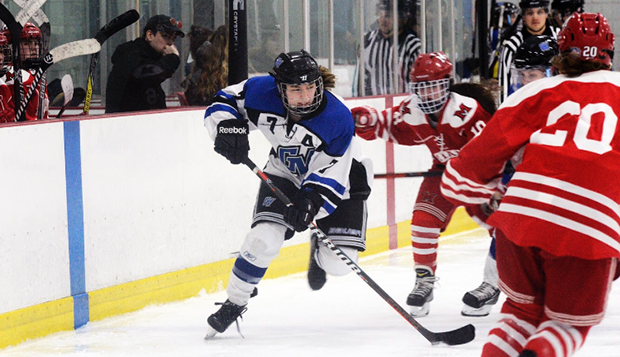 Sally Hoerr played the past four seasons as a defenseman on the Grand Valley State Lakers. (Submitted photos)

Over the past four seasons, Liberty University's ACHA Division I women's hockey team confronted defenseman Sally Hoerr and her Grand Valley State teammates eight times in battles on the ice.

Starting next fall, Hoerr will join the Lady Flames as a graduate student at Liberty, fortifying their defensive corps during her final season of ACHA eligibility.

Hoerr, who is taking this year off before beginning pursuit of her M.A. in Strategic Communications, made her official visit and skated with the Lady Flames for the first time in October.

"We are excited to be adding Sally to our incoming class for next year," Liberty Head Coach Chris Lowes said. "Sally is an experienced player who knows what it takes to be successful in this league."

A second-team All-Central Collegiate Women's Hockey Association (CCWHA) selection in 2018-19, Hoerr scored eight goals and distributed 35 assists in 115 games with the Lakers, helping them reach the ACHA DI National Championships in three of her four seasons.

"It is not a common thing for us to bring in a player for one year after playing at another school in our league," Lowes said. "We as a coaching staff felt this was a great opportunity to add a talented player that will add experience and maturity to what will be a young D corps next season."

She is excited to play with the two-time-defending ACHA DI national champions and experience all that the university has to offer, on and off the ice.

"I chose Liberty because it felt like a place that will encourage me to be ambitious and pursue excellence in both the athletic and academic aspects of my life," Hoerr said. "I am most excited for the opportunity to continue learning as a player and challenge myself as an athlete. There is an atmosphere of competition and support within the team where the players push each other to develop and grow."
Lowes is excited about the prospects of utilizing Hoerr in a variety of situations.

"Sally has the ability to fill a number of roles for us as a player," he said. "She is a good skater who has confidence with the puck on her stick. She moves the puck well and can also contribute offensively when the opportunity arises. I believe she will come in and grasp our systems quickly and allow us to continue to be a dominant defensive team in our league."

Hoerr will shift her loyalties in helping the Lady Flames achieve their goals, meshing her strengths into the team concept.

"I try to stay a reliable and consistent player, giving my best effort so my team can always count on me in any situation," she said. "With my previous years of experience, I hope to bring that same consistency to Liberty to be a strong root on the blue line."