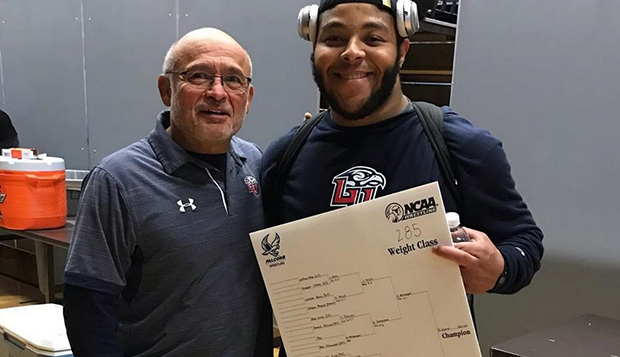 Scott won his first match by technical fall, 16-0 over John Lee of Lindsey Wilson (Ky.) before scoring an 8-2 decision over Newman University's Kendall Frame to advance to the championship quarterfinals. There, he won by 11-5 decision over Iowa State's Caleb Long before dropping a 7-4 decision to Indiana's Matt Ortiz in the semifinals. Scott lost both of his consolation matches to Oklahoma State's Cade Lindsey, 2-1, and Northeast Oklahoma's Jon Trowbridge, 16-14, in the fifth-place final.

Weaver was one of five heavyweights Liberty entered in the tournament, and one of four to score team points in the Black Division designed for freshmen and sophomores. He was pinned by Northeast Oklahoma's Dan Baker in 6:21 before pinning his next three opponents — Northeast Oklahoma's Seth Seago in 2:11, Missouri Valley's Christopher York in 2:24, and Lindenwood's Kaleb Bryant in 2:02. Weaver then won an 8-6 decision over Ramin Abraham before losing a 10-5 decision to McKendree's Dalton Hoover.

Sophomore Josiah Murphy won his first match by 5-2 decision over Joliet Junior College's Anthony Munoz before edging McKendree's Ian Kuehl, 2-1. He lost a 6-4 decision to Maryville's Aaron Herman before scoring a 7-5 decision over Lindenwood Belleville's Korinthian Nabors and being eliminated by 7-3 decision to Hoover.

Liberty's reigning 184-pound national champion Sam Karel lost his first match to McKendree's Jacob Anderson, 6-5. But after receiving his second bye, he won his next three matches — by 7-4 decision over Iowa State's Tyler Buesgens, 11-6 decision over Missouri's Sam East, and fall in 1:56 over Alston Bane of Marion (Tenn.).

At 197 pounds, Flames sophomores Sean Gillespie and Blake Barrick both won twice — Gillespie by fall over Central Oklahoma's Jaylon Chiles in 4:50 and by 11-8 decision over Missouri Valley's Robert Strong, and Barrick by 3-1 decision over Missouri Valley's Dayton Brown and fall over Brown's teammate Nathaniel Burlage in 3:23. Graduate Austin Amos, Liberty's two-time defending national champion, was pinned by Iowa's Sam Cook in his first bout before winning his second by 7-3 decision over Maryville's John Anderson and being eliminated by 5-2 decision to Oklahoma State's Barret Hughes.

Freshman 141-pounder Charles Hudson lost his first match by a 9-2 count to Missouri Valley's Blake Ackerman before receiving a bye and winning his next three bouts — by fall in 1:06 over MacMurray's Kavin Marcus, 9-7 decision over Central Oklahoma's Von Gray, and 6-4 decision over Ellsworth's Jackson Wenberg.

At 149 pounds, senior Michael Gowen won his opening match over Northeast Oklahoma's Elijah Jacobs by 5-4 decision before prevailing in double overtime over Labette Community College's Parker Price. He lost his next two bouts by 14-2 major decision to Lindenwood's Jack Tangen and 9-7 decision over Arkansas-Little Rock's Jake Turner and was eliminated.

The Flames have a month off before competing in the Dec. 29-30 Citrus Classic in Fort Lauderdale, Fla.