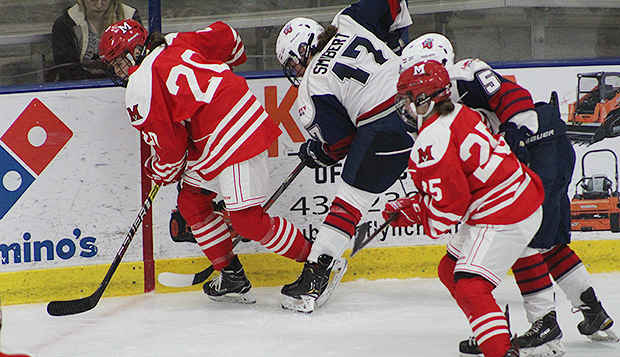 After winning its first seven games in November by a 56-5 count, Liberty University's ACHA Division I women's hockey team concluded the month with two competitive battles against Miami (Ohio) University in a fall semester-ending series at the LaHaye Ice Center.

The Lady Flames, who remained at No. 1 in this week's ACHA DI rankings, answered a tying score by the No. 8 RedHawks late in the second period and held on for a 3-2 triumph to sweep the series between teams who have combined to win the past six ACHA DI National Championships

"It's fun to play them," Liberty sophomore forward Grace Machholz said. "It was a very close game. I don't think we were expecting them to be this strong, but it was good for us. They've been very aggressive and it's always back-and-forth when we play them. It's good to see creativity. It forces us to play different, not be passive, and to really work on things we've been practicing."

Liberty (18-2) struck first with 12:56 left in the first period when junior forward Shelby Bradford skated the puck through the right circle and lifted a wrist shot on the short side inside the top right corner of the cage, glancing off the facemask of Miami goalie Ripley Crosley.

Just over two minutes later, junior forward Danica Polson doubled Liberty's lead to 2-0 by receiving Machholz's pass from the back boards and firing a quick shot from the right circle through a screen set by Aly Morris inside the right post.

"It was Grace that set me up on a quick give-and-go," Polson said. "I just shot it quick and got it to the net and they were going in today."

With the goal, Polson (15 goals,19 assists) moved ahead of freshman teammate Val Manchak into the ACHA DI scoring lead.

"It all has to do with my linemates," Polson said.

Miami (5-7) ended the shutout bid for Liberty freshman goalie Kayla Savoie-Penton less than two minute later, capitalizing on a power play with a slap shot from the high slot into the top-left corner to trim the deficit to 2-1 at the 9:11 mark.

The Lady Flames were unable to convert two power-play opportunities at the end of the first period, the last after Manchak was taken down with a hooking penalty as she skated through the left circle, causing her to crash into the left post.

After deflecting defenseman Sarah Peterson's shot from the top of the left circle off the pads of Savoie-Penton, Miami forward Emily Sloan netted a putback in the left crease, tying the game at 2-2 with 2:51 left in the second period.

"They definitely picked it up and we expected that, but we came out and still played our game," Polson said. "We just calmed down and were able to get the third one."

The Lady Flames responded on a fast break just over a minute later when Machholz fought to win possession of the puck from Peterson as she skated through the left circle and slid a pass to Polson in front, where she lifted a shot over the glove of Crosley for a 3-2 advantage at the 1:49 mark.

"Grace won the race to the puck and made a really good pass," Polson said. "I just drove on net and stopped in the crease and it worked out. It was a good response and we kept going. It was great. It sets the tone for next semester."

Liberty outshot Miami, 41-30, and both teams were called for three penalties.

"It was a great way to finish off 2019," Machholz added. "We had a lot of good chances. It was the gritty battles we had to face and be aggressive. We won a lot of faceoffs in their end, so it was good that we chipped it out and battled to get to the puck and then finished. It was a team effort."

The Lady Flames will open the spring semester with a Jan. 17-18 series against No. 14 Grand Valley State at the LaHaye Ice Center.