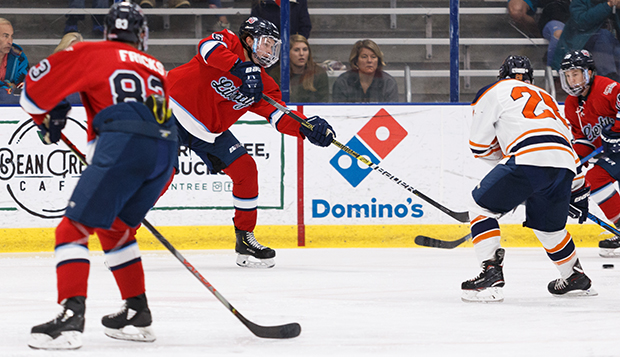 Lightning struck three times in the Tennity Ice Pavilion on Saturday afternoon as Liberty University's ACHA Division I men's hockey team scored in the opening 90 seconds of all three periods of its ESCHL rematch at Syracuse, sparking the Flames' attack in a 9-5 victory that completed a series sweep.

The No. 6 team in the ACHA DI rankings, Liberty (16-3, 9-1 ESCHL) has struck early and often this season, outscoring opponents by a 109-44 count. The nine-goal total against the Orange was the most it has scored since starting the season with 11-1 and 10-2 routs of Duquesne and IUP, respectively, in late September.

Just 25 seconds after the opening faceoff, the Flames executed their fast break to perfection with Cole Gammer digging the puck out of the defensive end with an outlet pass to fellow junior forward Jordan Bochinski, who skated up the left wing before sending a crossing pass to senior forward Andy Clarke for a one-timed finish and an early 1-0 lead.

"Tonight, we only scored one goal on the power play, but I thought we played really well five on five and the line of Clarke, Gammer, and Bochinski played fantastic," Liberty Head Coach Kirk Handy said. "We had a great start and when Andy (Clarke) goes down and scores on the first shift of the game, that was a bonus."

Liberty seized a 2-0 lead on the Orange (3-9-2, 1-8-1) by scoring a second after its power play expired with 13:25 left in the period when senior forward Quinn Ryan tucked in a rebound of senior defenseman Jacob Fricks' shot from the high slot.

Less than three minutes later, Syracuse forward Colin Morrow intercepted the puck and skated up along the right boards before sending a crossing pass to linemate Lucas Prestamo in the left circle, where he lifted a sharp-angled shot past Flames sophomore goalie Tyler Myers into the top right corner of the cage, trimming the deficit to 2-1 at the 10:29 mark.

Liberty got that goal back just over three minutes later when senior forward Zechariah Roberts sent a pass to senior defenseman Chaydan Lauber, who recovered his own blocked shot in the top of the right circle before blasting the rebound past Syracuse goalie Eric Parker into the lower left corner for a 3-1 advantage 7:19 before the first intermission.

The Flames started the second-period scoring nearly as quickly as they had in the first with Clarke starting a transition up the right wing to Bochinski, who dropped a pass back to senior defenseman Basil Reynolds for an open shot in the right circle, stretching the edge to 4-1 at the 19:04 mark.

Syracuse cut the gap to 4-2 when Morrow finished a fast-break feed from Matt Jacobs in the left circle with 16:12 left in the second period. Three minutes later, with Liberty back on the power play, the Flames won a faceoff in the offensive end and sophomore forward Arturas Laukaitis sent a pass across the slot to freshman defenseman Colin Baird, who ripped a shot into the top right corner for a 5-2 advantage.

Sophomore forward Josh Fricks padded Liberty's lead with 8:04 to go in the second period, receiving a perfectly placed outlet pass from Ryan beyond the Orange defense and finishing past Parker in the left crease. Just 38 seconds later, Lauber netted his second goal of the game on a wrist shot from the point under tight coverage from defenseman Luke Caddo to expand Liberty's advantage to 7-2 at the 7:26 mark.

"Lauber had two goals and played a great game for us tonight," Handy said.

Syracuse got two goals back on a five-minute major, both by Prestamo, to rally within 7-4. He took a pass from defenseman Ford Hatchett in the high slot and beat Myers with a wrist shot to the top right corner with 5:34 left and then slipped a rebound of defenseman Caleb Decker's shot from the top of the right circle under the pads of a sprawling Myers to complete his hat trick at the 3:07 mark.

Myers was injured on the play and replaced by freshman Cédric Le Sieur, who started Friday night's opener.

The Flames made it an 8-4 contest early in the third when Bochinski dug the puck out of the left corner to Clarke in the left crease, where he tapped a pass to Gammer in front for a point-blank finish at the 18:25 mark.

But Syracuse answered 55 seconds later when Connor Preston checked Liberty senior defenseman Garrett Nelson in the corner, springing the puck loose for Prestamo in the left circle. His shot trickled past Le Sieur and rolled across the line for his fourth goal of the game, cutting Liberty's lead to 8-5.

Flames sophomore forward Matt Bartel, who scored twice in Friday's opener, capped the offensive fireworks by cleaning up the rebound of a shot by Nelson on a quick counterattack at the 13:39 mark.

"They scored a couple and got close, but we were always able to find that next goal," Handy said. "Knowing that Thanksgiving break starts when the game ends, it was a tough game to play and I was proud of our guys' effort and focus for the most part."

Liberty outshot Syracuse by nearly a two-to-one margin, 40-22, and outscored the Orange, 16-8, for the series.

"We were very effective on offense," Handy said. "It was a conference game, so those were two big wins we needed to have there to end conference play for the semester on a pretty high note."

Liberty will have the Thanksgiving weekend off and return to the LaHaye Ice Center for the final series before finals and Christmas break against Slippery Rock on Dec. 6-7. 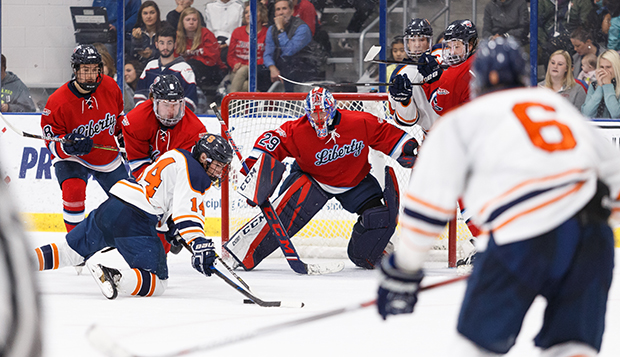