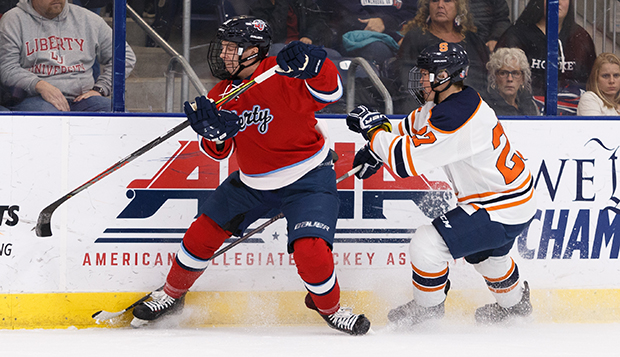 Cole Gammer scored off Andy Clarke's assist for a 5-2 lead and set up Jordan Bochinski's empty-netter. (Photo by Luke Bobbey)

Special teams was the name of the game for Liberty University's ACHA Division I men's team in Friday night's opener of its ESCHL series against Syracuse at the Tennity Ice Pavillion.

"Our power play had been struggling, and tonight was fantastic," Liberty Head Coach Kirk Handy said. "That was huge for us. We changed it up this week and they responded well to (Assistant) Coach Dan (Berthiaume). I still feel like there's improvement that we can continue on in the five-on-five."

The Flames dominated the rematch of last season's ESCHL Tournament championship, won by Syracuse in double overtime — outshooting the Orange, 46-20, and winning the faceoff battle by a 45-27 count.

With Liberty on the power play at the 14:21 mark of the first period, sophomore forward Matt Bartel converted the game's first goal. Moments after winning a faceoff in the Syracuse end, he rifled a rebound from deep in the slot into the top right corner of the cage for his first goal since the Orange visited the LaHaye Ice Center on Oct. 18-19.

At the 13:03 mark of the second period, Syracuse netted the equalizer when defenseman Ford Hatchett launched a shot from the high slot and forward Adam Bedford slammed the rebound past Flames freshman goalie Cédric Le Sieur from in the right crease.

Senior forward Andy Clarke, who, like Bartel, hadn't scored since the last time Liberty met the Orange more than a month ago, put the Flames back on top less than three minutes later by skating the puck out of the back boards and cutting across the crease before sneaking a backhanded shot past Syracuse goalie Eric Parker with 10:15 left in the second.

Liberty extended its advantage to 3-1 with another power-play goal by Bartel with 8:52 left in the second when he received senior forward Quinn Ryan's pass across the slot deflected by Syracuse forward Colin Morrow and ripped a wrist shot from in the right circle past Morrow and Parker inside the right post.

The Flames completed their third power-play goal with 4:36 left in the second period when senior forward Zechariah Roberts skated the puck across the high slot and launched a shot through traffic into the upper netting for his first goal since Oct. 11, extending Liberty's edge to 4-1.

Syracuse sophomore Zach Gordon cut the deficit to 4-2 with 14 seconds remaining in the period by tipping in a shot by Lucas Prestamo, who crashed the cage to put back a rebound in the slot.

Just over a minute and a half into the third period, Flames junior forward Jordan Bochinski dug the puck out of the right corner to Clarke, who sent a cross-crease pass to junior forward Cole Gammer for a wide-open finish in the left crease, pushing the Flames' advantage back to three goals at 5-2.

Then, at the 13:23 mark, senior defenseman Garrett Nelson sparked a three-on-one rush by digging the puck out of the Liberty end up to Bartel, who sent a fast-break feed across to freshman forward Colin Baird. Parker blocked his shot, but sophomore forward Arturas Laukaitis was right on the spot for a point-blank putback, stretching Liberty's lead to 6-2.

Syracuse capitalized on a power-play opportunity with 2:52 to play when leading scorer Peter Owen Haywood rifled a shot past Le Sieur from deep in the right crease. But after the Orange pulled Parker, Bochinski capped the scoring with an empty-netter off a fast-break assist from Gammer with 2:24 to go.

The two teams will meet in the rematch set for 2 p.m. back at Tennity Ice Pavillion, webcast live on Syracuse's YouTube channel.

"We've got a quick turnaround, but we are looking forward to playing again one more time before Thanksgiving break," Handy said.