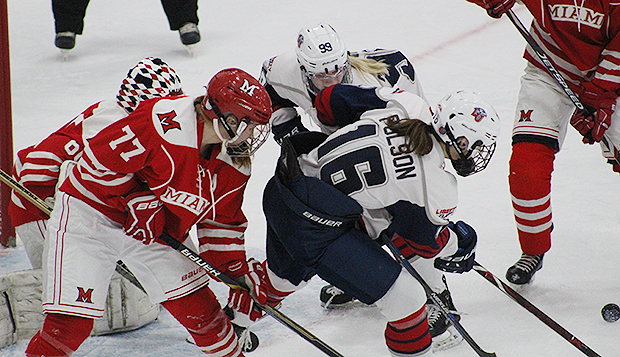 Winners of the past six ACHA Division I Women's Hockey National Championships went head-to-head in Friday night's showdown between Liberty University and Miami (Ohio) University at the LaHaye Ice Center.

The two-time-defending champion Lady Flames, who dethroned the RedHawks for their first title in 2015, got two goals from sophomore forward Grace Machholz and two more from junior forward Danica Polson — both off assists from senior defenseman Emily John — in a 5-2 triumph.

"Offensively, we looked pretty strong," Liberty Head Coach Chris Lowes said. "Our offensive zone possession was pretty good and we were creating chances. Overall, we did a lot of the things we wanted to do. We limited free chances and odd-man rushes for them. The second period was one of the better periods we have had all year and it put us in a good spot."

Moments after senior goalie Nadia Rupoli dove on her stomach to smother a loose puck with her glove on the Lady Flames' end, Machholz ended a scoreless tie with 4:21 remaining in the first period, crashing the cage to put away the rebound of John's shot from the high slot past RedHawks goalie Ripley Crosley for a 1-0 Liberty lead.

Then, just over two minutes later, Polson skated down the slot to pounce on the putback of sophomore forward Aislyn Stretch's shot from the top of the left circle before lifting a wrist shot top-shelf into the right corner for a 2-0 advantage at the 1:58 mark.

Machholz capitalized on a fast break with a tremendous individual effort at the 17:47 mark of the second period, following her own blocked shot by lifting a backhand past Crosley from deep in the left crease.

"She had some moments tonight when she was leading our team with intensity," Lowes said. "Grace has that ability to be tough and to win battles and that one goal, especially, was all about effort, just her putting that extra work in, battling, stopping at the crease, engaging and really having a desire (to finish)."

Polson atoned for misfiring on a wide-open shot in the left crease by capitalizing on her next opportunity, a one-timer from near the same spot off a beautiful cross-crease feed from John for a 4-0 advantage at the 11:13 mark. That was Liberty's only power-play chance on the night and Polson made it count.

Senior defenseman Dana McLeod capped the scoring for the Lady Flames, intercepting a pass on the defensive end and accelerating past three RedHawks before catching Crosley off guard with a shot from inside the right circle into the top-left corner of the cage to stretch the edge to 5-0.

"Dana just jumped up in the rush and created the three-on-one and sniped it," Stretch said. "We can roll four lines and everyone can go out and produce and the defense have been creating offense with dangerous shots."

Miami ended Rupoli's bid for an eighth shutout on the season, with Sara Gargasz sneaking a shot from the top of the left circle inside the left post moments after its only power-play chance expired.

The RedHawks added a second goal for with 7:42 left in the third period on a top-shelf finish by Katie Sciales off Amanda Pugliese's feed across the top of the slot for the game's final score.

The Lady Flames (17-2), who remained at No. 1 in this week's second ACHA Division I national rankings, hosted Miami (5-6) for the first time since Jan. 19-20, 2017, when they swept the series before losing the rematch with the RedHawks in the ACHA DI final two months later in Columbus, Ohio. Miami also won the 2014 and 2016 crowns after defeating the Liberty in the semifinals both times.

"It's a big rivalry and we don't want them to dethrone us, so we've got to keep it up," Stretch said.

The two teams will meet again on Saturday at 1:30 p.m. back at the LaHaye Ice Center, in the final game of the semester for the Lady Flames.

"We've got to come back and know that they're going to be fired up and even more motivated," Lowes said. "We've had a good semester, but it's all about finishing against Ohio, which is a good team."

"Hopefully, if we carry on the game we were playing today, we should be good, and end the semester on a high note," Stretch added. 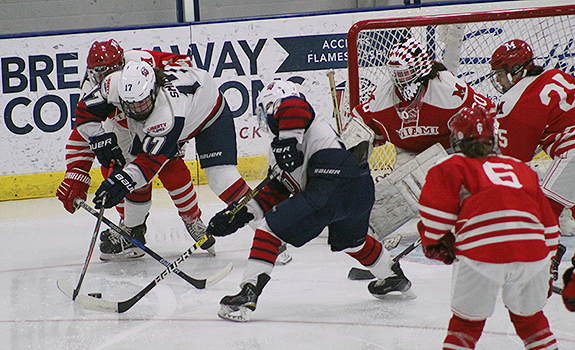