Lady Flames will enter ACHA DI nationals as No. 1 seed 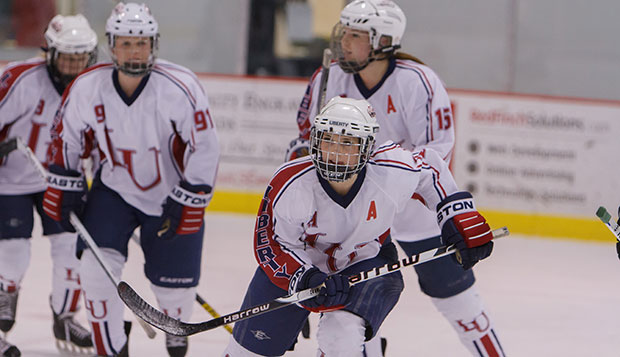 When the final American Collegiate Hockey Association Division I women's rankings were released Monday night, Liberty University was the near-unanimous choice to stay at No. 1 for the third consecutive poll.

The Lady Flames (25-2) received all but one first-place vote and will enter the ACHA DI tournament, set for March 6-10 at The Ice House in Ashburn, Va., as the No. 1 seed for the first time.

Competing at nationals for the fifth time in the past seven seasons, they will face No. 8 Michigan (18-5-4) in the first round. Liberty defeated the Wolverines 2-1 in their last meeting, Nov. 20, 2011.

"They've never beat us yet, but they're building their program," Lady Flames head coach Paul Bloomfield said. "They're going to be ready for us. They're not going to bring anything to us that we haven't seen. We just need to be on our game."

"Everybody there in the last couple of weeks was beating each other, so we knew we probably would end up ranked first," Bloomfield said. "We didn't know who would come in at the bottom of the pile."

Michigan and Rhode Island are the only two teams in the tournament field the Lady Flames haven't faced this season.

"The top eight are all going to be (capable of winning it all)," Bloomfield said. "Everybody's going to have to be on their game. There's no room for mistakes."

The Lady Flames will be grouped with Minnesota, Rhode Island, and Michigan in Pool A and could play two games on March 7. UMass, Robert Morris, Northeastern, and Michigan State will be in Pool B.

Bloomfield approaches nationals with cautious optimism, especially compared with last year, when Liberty entered the tournament seeded third and finished fifth after being eliminated by eventual champion Northeastern in the third round.

"I think they're ready, (though) you never know for sure until the day," he said, noting freshman right wing Catharine Burrell, who's out with a knee injury, is the only player on his roster who won't be available. "We're much healthier this year and we've got more bodies, too, so that helps. I think we've got what we need. We need to make sure that we're there and ready to go."

The Lady Flames will practice three times this week and next to sharpen their skills and fine-tune their game plan going into nationals.

"I'm not arrogant about it (but) I know if the girls show up to play, we have a good team," Bloomfield said. "We just need to keep in shape and keep on the ice, so we don't get rusty."