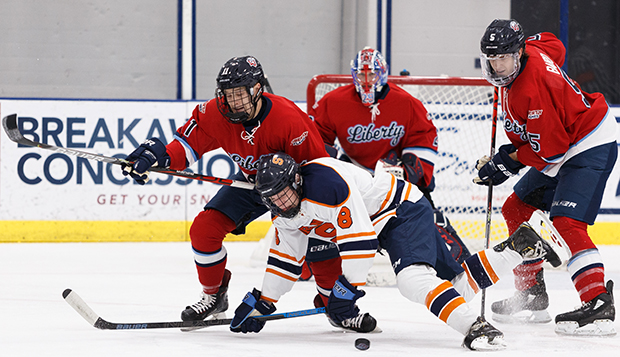 The two-time defending ESCHL regular-season champion Flames, who salvaged a split at second-place New York University last weekend, lead this season's conference standings while the Orange are stuck in the cellar. Liberty is 9-0 in the friendly confines of the LaHaye Ice Center, but only 5-3 on the road this season.

The last time the Flames and Orange met, Oct. 18-19 at home, junior forward Jordan Bochinski converted a hat trick in a 4-2 come-from-behind victory in the opener before Liberty went a perfect six-for-six on the penalty kill in a 4-1 win in the rematch.

All-Time Series: The Flames lead the Orange, 6-3, since Syracuse joined the ESCHL in 2017. Liberty lost the teams' only postseason matchup last March in the ESCHL Tournament final decided in double overtime.

Syracuse Scouting Report: The Orange, which was swept at New York University in its ESCHL-opening series, is coming off back-to-back splits in its first two home series — against No. 24 Drexel and Stony Brook, which won the second game in a shootout but still dropped out of this week's ACHA DI Top 25. Syracuse will seek to continue that trend on its home ice against the Flames, which won the only two previous meetings at Tennity last season.

The Orange attack is sparked by senior forward Peter Owen Hayward (7G, 6A), who also leads the team with 51 penalty minutes, and defenseman and alternate captain Ford Hatchett (3G, 9A). Lucas Prestamo (5G, 6A) has a team-high three power-play goals while fellow forward Matt Jacobs (4G, 6A) and defenseman Luke Caddo (3G, 7A) are the only other 10-point scorers.

Coaches: Handy is in his 20th season as Liberty's head coach and has compiled an overall record of 446-183-29. Connor Treacy is in his second year as Syracuse's head coach after serving as an assistant the previous five seasons and has posted a 24-17-3 record to date.